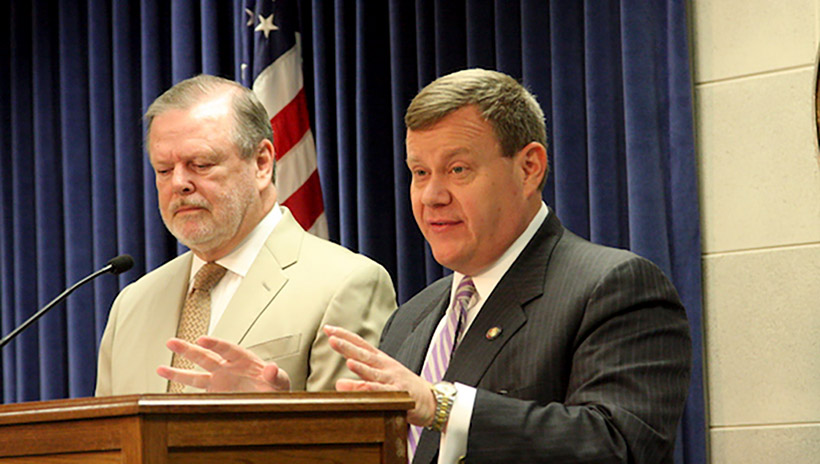 Senate leader Phil Berger, R-Rockingham, and House Speaker Tim Moore, R-Cleveland, are refusing to release a state budget prepared by negotiators from both chambers until the Democratic governor presents a counter offer.

"Last week, we hoped to have the budget read in by this evening," Berger and Moore said in a joint statement released Monday, June 24.

"We are delaying that schedule to maximize the time for Governor Cooper to respond to our offers from our Friday morning meeting," they said. "We have requested specific compromise proposals from the Governor for two weeks and he has not provided any. We hope he does so soon."

The fiscal year ends Friday. If the biennial budget for 2019-20 and 2020-21 isn't passed by then, the government won't shut down but would continue to operate under the same funding levels in the current budget. That means state pay raises, program funding increases, some policy matters, and other items that would have gone into effect would be put on hold.

"We want a budget that invests in teacher pay instead of more tax cuts for corporations, that has a school and infrastructure bond instead of a slush fund, and that includes Medicaid expansion to insure 500,000 more North Carolinians," Porter said in a news release 90 minutes before Berger and Moore's statement came out.

"Right now, legislative Republicans are not interested in serious negotiations on these issues, but we hope they will change their minds and agree to put everything on the table as Governor Cooper has," Porter said.

Medicaid expansion is unlikely to get approval this year. Sen. Dan Bishop, R-Mecklenburg, issued a news release through Berger's office Monday challenging five claims Democrats have made in support of Medicaid expansion.

Those claims included the contention expansion would lower insurance premiums for others. Bishop said Arizona shifted the additional Medicaid costs onto those with private insurance, causing premiums to jump 27% above hospital losses from the government payments in three years.