Playing college basketball is a dream many don’t get to experience. For East Carolina University graduate student Addison Hill, not only did he get to experience that dream, but he got to do it in his hometown. east carolina university, ECU, pirate profile, addison hill, june 24, 2019
Home
Categories
Login

Playing college basketball is a dream many don't get to experience. For East Carolina University graduate student Addison Hill, not only did he get to experience that dream, but he got to do it in his hometown.

Hill, a native of Greenville and graduate of South Central High School, is pursuing a Master of Business Administration degree. He graduated in May with a Bachelor of Science in sociology and a minor in criminal justice. 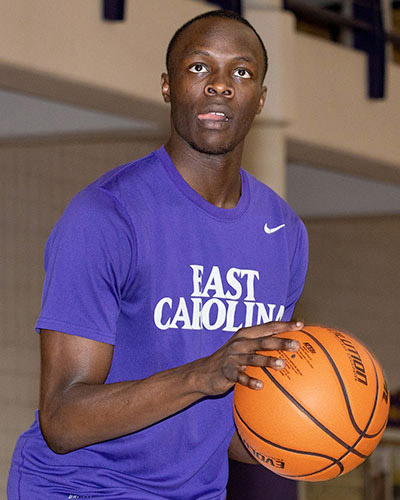 As a senior, Hill was named a captain by head coach Joe Dooley and saw significant minutes and even started 11 games for the Pirates this past season. | Photo: Rhett Butler
Hill said he wanted originally to major in health fitness so that he could be around a sports environment but saw that he could make a difference somewhere else.

"I started reading about prisons, and Angela Davis came to speak here. She's a civil rights activist and she talked about prison abolition, which isn't really talked about but is a part of society now," Hill said.

Hill said that he feels he can make a change someday in the criminal justice system, especially for minority groups, which is what led to the interest in sociology and criminal justice.

The classroom wasn't the only place Hill had success in his time at ECU.

Hill's journey with the ECU basketball team started as a team manager his freshman year. During his sophomore year, Hill made the team as a walk-on before earning a scholarship to play his senior year. As a senior, Hill was named a captain by head coach Joe Dooley and saw significant minutes and even started 11 games for the Pirates this past season.

There were two things that Hill said got him to where he was on the basketball team.

Hill was named to the American Athletic Conference All-Academic Team for the 2017-2018 season and was a selection for the ECU Men's Basketball Academic Award for the 2018 spring semester.

Once the basketball season was winding down, Hill said he was eligible for two post-graduate scholarships, the Walter and Marie Williams Spirit of the East Scholarship and the Pat Draughon Postgraduate Scholarship.

"I applied for both of them and got both of them. I wasn't even planning to go to grad school at first," Hill said.

Now, Hill said his focus is on real estate, but he still hopes to make an impact on the criminal justice system one day. He works with Wholesale Real Estate and is interning with The Overton Group Real Estate Professionals. Hill is a board member of N.C. CIVIL, a nonprofit organization that specializes in community outreach and is actively finding ways to reduce recidivism through its employment pipeline.

Hill said that he plans to be a real estate investor once he completes graduate school.

What is something cool about ECU that you wish you knew during your first year?: The library is really helpful; I wish I had used it more during my freshman year.

What advice do you have for other students?: Don't be afraid to step out of your comfort zone.