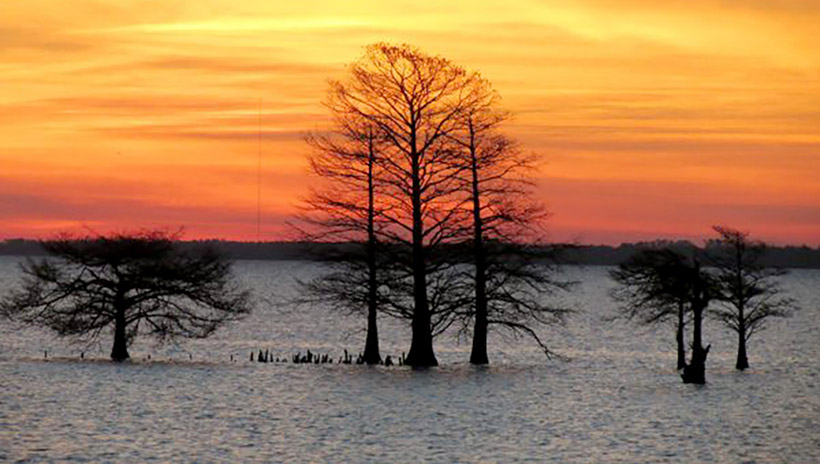 Growing up in Pitt County, Dr. Randall Etheridge had heard of Lake Mattamuskeet but admits he didn't know much about its environmental importance.

Shortly after arriving at East Carolina University as an assistant professor in the College of Engineering and Technology four years ago, Etheridge began a research project at Lake Mattamuskeet. He now finds himself on the front lines of a watershed restoration plan designed to protect North Carolina's largest natural lake.

Etheridge recently received a $19,284 grant from the U.S. Fish and Wildlife Service to continue those efforts. It will be his fourth research project involving the Hyde County lake that serves as a home away from home for 200,000 migratory birds each winter.

"The goal is to see whether Lake Mattamuskeet is exporting bacteria to the Pamlico Sound," Etheridge said of the most recent grant. "No one really knows what the bacteria levels are coming out of the lake right now."

Etheridge said those bacteria levels could impact shellfish such as oysters and clams that live in Pamlico Sound, and the commercial and recreational fishermen who harvest them.

Lake Mattamuskeet covers 40,100 acres - roughly 126 square miles - but it is generally just 2 to 3 feet in depth. The U.S. Fish and Wildlife Service, along with the N.C. Wildlife Commission, N.C. Coastal Federation and Hyde County, started a Watershed Restoration Plan in 2017 to address water quality and elevated water levels in the lake that could lead to flooding of nearby farms and private property.

One of the possible solutions to ease the flooding concerns is to drain more water from the lake through canals into the Pamlico Sound.

"They need to increase the flow out, and in increasing the flow out, there's the potential of increasing the amount of bacteria that are reaching the Pamlico Sound, so the goal is to find out what is going on now, so they can estimate what would happen in the future if they did increase the flow," said Etheridge, who focuses much of his research on agricultural and ecological engineering.

Etheridge's other research involving Lake Mattamuskeet included modeling the effects canal dredging and sea level rise could have on lake outflow, determining the areas draining to the lake and monitoring the quality of water from waterfowl impoundments flowing into the lake.

"Fish and Wildlife approached us about the first project," Etheridge said of the research. "They had built partnerships with N.C. State and UNC-Chapel Hill. They realized the magnitude of the problem and recognized ECU had some expertise they could use as well."

Etheridge said he has enlisted the support of at least one undergraduate student for this most recent grant project. Five graduate and seven undergraduate students have worked on his other projects at Lake Mattamuskeet. In July, he expects to be back at the lake that is home to black bears, deer, otters and 240 species of birds, including ospreys and bald eagles.

"It is amazing," Etheridge said of the lake.