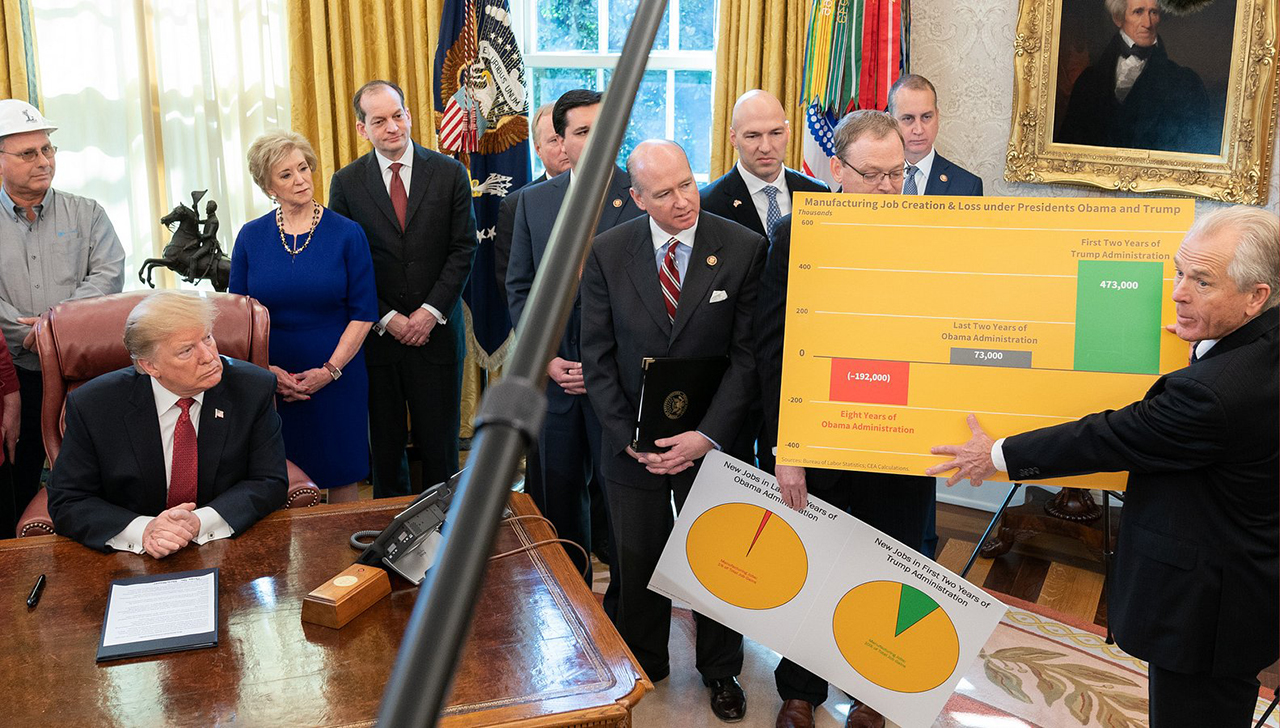 THE PRESIDENT: Well, thank you very much. I'm honored to be here with many of the great American workers as we take historic action to accelerate the incredible revival of American manufacturing. It truly is a revival. Nobody thought it was possible, actually. And not only is it possible, but we're thriving.

We're also grateful to be joined by Secretary Acosta, Administrator McMahon, and Representative Robert Aderholt, Mario Diaz-Balart. And we're working on a lot of interesting projects in your neck of the woods, aren't we, huh? How's that all going?

REPRESENTATIVE DIAZ-BALART: Mr. President, you are a champion of freedom in this country.

THE PRESIDENT: I didn't expect that. I never told him to say that. (Laughter.) Well, that was a great move. Every once in a while (inaudible). (Laughter.) And you too, that I can tell you. Thank you very much. I appreciate it.

Robert Aderholt. Robert, thank you very much. David Joyce, Anthony Gonzalez, and David Rouzer. Thank you all for being here. We really worked hard on this. And I appreciate your support.

In the eight years before I took office, we lost nearly 200,000 manufacturing jobs. They were leaving. People were talking about the fact that you needed a magic wand; you'll never bring them back. You remember the previous administration, he said that they said - he said - they all said you needed a magic wand; manufacturing jobs were over. I guess you people heard that too. It was a little bit discouraging.

And since the election, we've gained more than 500,000 jobs - and that number is going to be very soon to 700,000 jobs - all in the manufacturing world, which is a beautiful world, a high-paying world, and very important for our country.

Last year, we saw the biggest increase in manufacturing employment in more than 20 years. Early in my presidency, I issued an executive order directing the federal government to live by two very crucial rules: Buy American and hire American. And I think that sounds appropriate. Remember in the old days? It was not that. It was almost the opposite. You'd say, "Where are they coming from?"

Federal spending on foreign goods is now the lowest it's been in more than 10 years, and it's going down very substantially. And, by the way, we don't get treated great by many countries in terms of our trade deals, and that's changing rapidly. But we are now looking out a little bit for ourselves and it's about time.

Today, I'm taking action to build on this tremendous success by strengthening the Buy American principle for federal infrastructure and federal spending.

We want American roads, bridges, and railways, and everything else to be built with American iron, American steel, American concrete, and American hands. And if you look at what's happened with the steel industry, it's actually amazing. The steel industry is thriving now and it was dead when I came to office. It was dead. It was a dead industry. They were dumping steel all over the place. The jobs were going. And if any of you were in the steel industry, I think you can probably tell them, you know. And aluminum, too.

But when you look at what's happened to the steel industry, it's been incredible. One of the great successes. And now prices are starting to come down because they're competing with each other. Nucor and U.S. Steel and so many of these companies, they're building many, many plants all over the United States. And as those plants open, they're finally competing with themselves.

We literally were not going to have steel companies. We weren't going to make steel in this country. And that in itself is a very important thing. We have to have steel. There are some products you have to have. And, by the way, steel is one of them.

You talked about defense - how do you do it without steel and aluminum and the kinds of things that we're really very heavily focused on.

By signing this order today, we renew our commitment to an essential truth: It matters where something is made, and it matters very greatly.

When I came to office, and I witnessed for many years - for decades, frankly - they didn't care where it was made. I care where it's made. It should be made right here in the USA. And we've taken a very strong stand.

I want to introduce, before I sign, Peter Navarro and Kevin Hassett, two of my great economic people. And they're going to give you a little talk as to what's happened and how good we're doing.

Peter, do you want to start?

MR. NAVARRO: Thank you, Mr. President. I remember back during the campaign, the naysayers said that this President could not restore the manufacturing base.

I'm just going to show you a couple pictures here. What we have here is a chart that shows the loss of 192,000 jobs during the eight years of the Obama administration. It did tick up a little bit during Obama's last two years: 73,000. But it is absolutely dwarfed by the policies of this President: 473,000 since Inauguration Day, and over 500,000 since the election.

And then you can see how the emphasis is on this administration in putting men and women who work with their hands to work. You can see the jobs created in the Obama administration: One percent of the total job gains were manufacturing compared to 10 percent.

And the folks here that you see on the President's right come from across this great country, and they build essentially the mother's milk of Americana. It's lamppost, it's fire hydrants, it's water mains. And we salute these workers today coming in this White House.

Kevin is going to show you another chart that shows how these distribution of manufacturing gains are across this country, and then we'll kick it back to Mr. President.

CHAIRMAN HASSETT: And again, the economics literature, Mr. President, when you were running for office basically said that manufacturing was going the way of agriculture in the previous century; that it was just on an inevitable decline as a percentage of GDP. But it also focused a lot on this idea that there was a rust belt in America. There was a place where there used to be manufacturing, where there was disproportionate harm to workers.

But if you look at all the pockets all across the country, including in places that people used to call the Rust Belt, where manufacturing employment is booming, what it means is that there's basically a boom belt from coast to coast that's been created by our policies.

And we have a lot of bite-back because other countries are not doing well. China is having a very hard time. They're here now. We're going to be seeing them a little bit later. We're trying to work out a new trade deal with China. I think it will happen. Something will happen. But it's a very big deal. It will be - if it does happen, it will be, by far, the largest trade deal ever made.

And we essentially didn't have a trade deal with China. We lost $500 billion with China, for many years, a year. Anywhere from $300- to $500-, $505 billion a year was lost in our dealing with China. And I have a very good relationship with President Xi, and I think we'll sit down at the end - at the end of the negotiation by our representatives - and do something with respect to making a deal with China. I think it has a very good chance of happening.

But China is having a very hard time with their economy, and the European Union is having a hard time. A lot of things going on. And we're getting tremendous numbers. Tremendous unemployment numbers - among the best we've ever had in the history of our country. Individual groups the best: African Americans, Hispanics, Asians, women. Numbers that we haven't seen before. The overall is the best numbers. Best employment numbers in 51 years.

So we're doing really well. I wish the press would report it.

I'm going to sign this. Before I do, I think I want to just ask a few of you folks, would you like to say something? Anybody? Anybody want to become a congressman by (inaudible)?

MR. MULLER: Mr. President, I'd like to thank you for the tax cuts. It's been rocket fuel for our business for manufacturing.

MR. FORTNEY: Mr. President, I'd like to thank you for the - this Buy American push that you've got with federal funding for the infrastructure that's Buy American. It's jobs for us. And it puts us in a position where we can compete. Otherwise, we tend to walk to away from jobs where foreign competition is going to take our business.

MS. HARRISON: And I'm with McWane, in Birmingham. We're based out of Birmingham, Alabama. We have seen a tremendous uptick. We're representing several divisions with McWane here, but thank you for everything you've done.

THE PRESIDENT: That's great. Great group. Thank you. Thank you all very much. You want to say anything? Anybody else?

Anybody want to become a congressperson?

MS. MARTINEZ: Just that it gives us an opportunity to hire, obviously even more opportunities that we have to fill positions as jobs increase.

MR. FORTNEY: That's Brenda Martinez with U.S. Foundry. She's our HR, and she hires people when we get more work.