Ortrud (Oddy) Crist to Speak to the Lake Norman Conservatives

Crist will discuss current events in relation to her upbringing in war-torn Germany.

Copies of her book: "THE VERDICT: God is NOT Dead," will also be available. 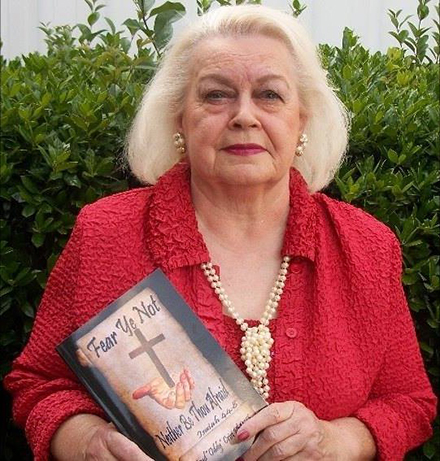 Dr. Oddy Crist
When Dr. Crist arrived in America as a young bride, she left behind a war-torn, bombed out Germany whose cities still bore the evidence of WWII, which had raged on for many years. The Allied forces - through their relentless bombing of cities, railroad bridges, even homes - brought Hitler's horrendous regime to an end.

Poverty, hunger, and displaced people by the millions fleeing from Eastern European countries ahead of the advancing Russian Army made the effects of war even worse. By government orders, German residents were forced to rent rooms in their homes to strangers and to share kitchens and bathrooms with them as well. All commodities necessary for life (food, gasoline and other items) had to be purchased with rationing stamps.

Since no peace treaty was signed to end the war, Germany existed under a 'truce', being divided into four regions ruled by different Allied Powers. Crist's family lived in the English occupied northern region of Germany. The English Commander found her grandparent's farm with its land & many buildings very suitable for their headquarters, and they laid claim to it for many years.

Having been bold enough to be part of an underground resistance movement to hide and feed Jews from the Gestapo (Hitler's Secret Police) during the 1930's and 1940's, Crist's family petitioned the governing powers to have their names cleared of being Nazi's. After much paperwork and long waiting periods they were eventually successful.

When Crist was 18 her parents consented to her marrying an American and she moved 6,000 miles away to California - a land they thought of as 'flowing with milk and honey' due to the lavish spending of American tourists. It was their hope that this would ensure a better, safer and more prosperous life for their daughter. After living in California for eight years, she and her two children joined her officer husband at the U.S.Army installation in Ft.Bragg, N.C.

As Crist's love for her new homeland grew and her patriotism for America increased, she became concerned about two things. First, High School students in California could opt out of History classes, and second, she was appalled by the lack of participation of Americans when it came to voting and being involved in the political process, which looked to her like a formula for disaster.

Crist is following the example of her parents and grandparents by standing up for her convictions and making a difference. When obstacles arise she encourages others to investigate, become involved, and make a difference themselves in preserving America, "A country God chose to establish as a 'launching pad' to spread His Gospel to all the peoples in all countries on this globe."

Crist holds a PhD. In Theology and an MA in Pastoral Counseling