House Sends Budget to Governor, who Won't Say What Happens Next | Beaufort County Now | Debate was more civil, but the outcome was the same. House Republicans followed the Senate's lead, voting 66-44 to pass a $23.9 billion General Fund budget, and sent it to Gov. Roy Cooper over Democrats' objections | State Budget,General Fund,Governor Cooper,Tim Moore

House Sends Budget to Governor, who Won't Say What Happens Next

Published: Wednesday, June 6th, 2018 @ 9:19 pm
By: John Locke Foundation   ( More Entries )
Publisher's note: The author of this post is Dan Way, who is an associate editor for the Carolina Journal, John Hood Publisher.

Debate was more civil, but the outcome was the same. House Republicans followed the Senate's lead, voting 66-44 to pass a $23.9 billion General Fund budget, and sent it to Gov. Roy Cooper over Democrats' objections.

Cooper, a Democrat whose $24.5 billion spending plan was dismissed by majority Republicans, has 10 days to sign the measure, veto it, or allow it to pass without his signature.

Cooper spokesman Ford Porter said the governor will spend the next few days reviewing the budget, but wouldn't say which option he would choose.

"We can do so much more to raise teacher pay, improve school safety and protect drinking water, but legislative Republicans thought it was more important to protect their tax breaks for corporations and people making over $200,000 a year," Porter said in a written statement moments after the budget passed.

"This is a good budget, and it was a fair process," Moore said. "It is absolutely and entirely consistent with our rules."

Democrats continued to grumble about Republicans using a parliamentary procedure to place the budget into a conference report that disallowed any changes.

"Don't make arguments that there's no input because we all know better," Moore said. Without naming them, he said several Democrats asked for specific items to go in the budget, and GOP budget writers granted some requests. More than 90 percent of the budget was set from collective ideas of all members during last year's long session.

Republicans took turns defending the contents and merits of the budget. Democrats repeated a refrain that the budget could have been better. Attempts to bring Democrats' ideas on board were thwarted by a secretive conference committee process and rules that barred them from offering amendments, they said. 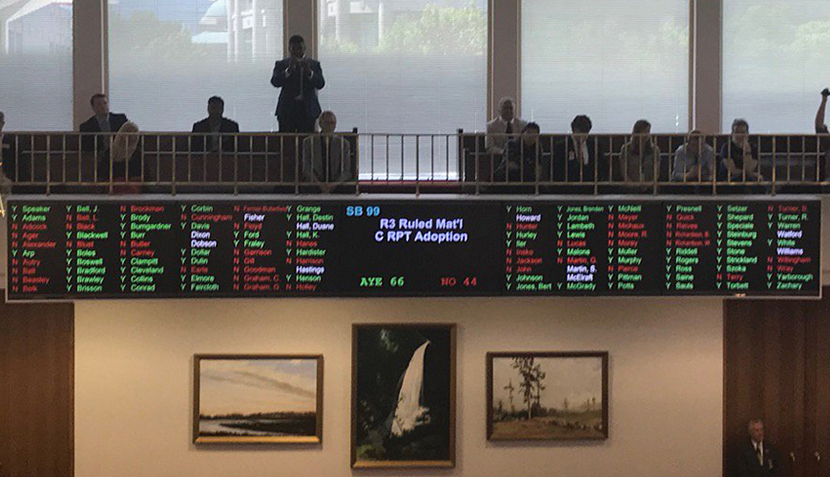 The final House vote on the 2018-19 General Fund budget. (Photo from Becki Gray)

House Minority Leader Darren Jackson, D-Wake, said North Carolinians are smart enough to recognize a bad process and a rigged budget when they see it.

"Democrats want to go back to the days of tax and spend. That's all I've heard," Dollar said. Even the 55,000-member State Employees Association of North Carolina has endorsed the General Assembly's budget, which raised state workers' minimum salary to $31,200, and included a 2 percent raise.

House Majority Leader John Bell, R-Wayne, said those were life-changing adjustments for some state employees, who could now buy a car or a house.

Bell said $300 million is included for disaster relief to help victims of Hurricane Matthew. Lawmakers probably will return to Raleigh in a few weeks to consider more disaster relief allocations for victims of Tropical Storm Alberto that flooded the western part of the state.

He contrasted that with $400 million of federal block grant disaster funds available for Hurricane Matthew relief sitting idle in the Cooper administration as victims plead for help more than 600 days after being hit.

"The Cooper administration has flat-out failed," Bell said. "There are no answers. You can't get the answers."

Rep. Billy Richardson, D-Cumberland, was among several Democrats who expressed disappointment in the budget, but extended conciliatory remarks.

"At our core we all love this state," Richardson said. In the heat of debate, lawmakers sometimes forget they are colleagues. He said Democrats have a responsibility as the loyal opposition to caution the majority, "we're not where we need to be."

Rep. Grier Martin, D-Wake, defended Thursday's fiery rhetoric from Democrats, saying it merely met the seriousness of the damage Republicans had done to the budget process.

He dismissed some Democrats' complaints that North Carolina is now a dictatorship, but said continuing to follow this process could lead to that outcome within a quarter century.

In contrast, Rep. Larry Bell, D-Sampson, a former athletic coach, simply said the General Assembly wins and loses as a team, and everyone should have a chance to play.

"We are doing a lot of good things," he said, and every budget he's seen since he came to Raleigh has good and bad elements. "If you put them in a sack, they all fall out the same way."