To Kill a Mockingbird

I Always Wanted to Know an Atticus Finch

And yet I never quite met him. I never found him in any of my coaches, my teachers, my friends, the fathers of my friends and even my beloved father never had that perfect pitch of 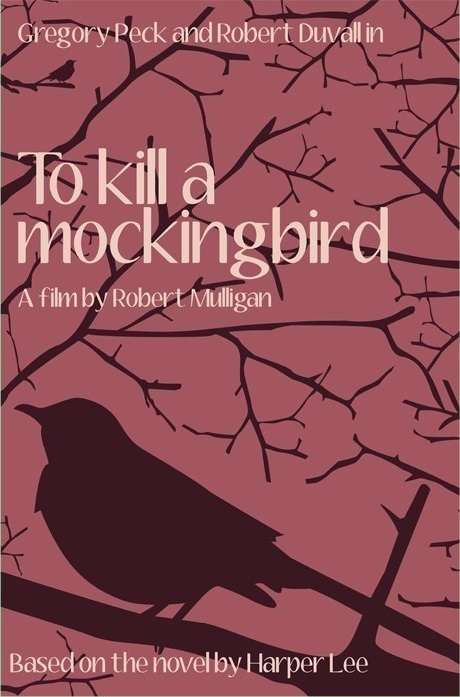 character while he still ranks as the greatest inspiration to my manhood. I once had a minister that came close, who was also the father two of my friends, but he could never turn a phrase like Atticus. Ronald Reagan seemed about the closest, but I never actually met "The Great Communicator," so I'll have to strike "The Gipper" from contention.

No, I think I may go to my grave never knowing an Atticus Finch, but I am so very thankful that Harper Lee had a father, who helped her live such a life to inspire her to write the one great novel of her literary career, "To Kill a Mockingbird." We are all so very fortunate that her life in the deep south of southwest Alabama led her to write this great American story and so very fortunate still that the film "To Kill a Mockingbird" was made so well and has been an inspiration to so many and has changed so many hearts.

You doth protest that I gush too much? Well settle back and be warned, I'm just getting started.

In the summer of 1963, I was spending my first week at an Episcopal Church camp in eastern North Carolina, when we were called to assembly in the Virginia Dare Hall - a wood frame hall painted white perched upon the sandy shores of the Pamlico River. We sat upon the wood floor and watched the ensuing black and white feature film on the 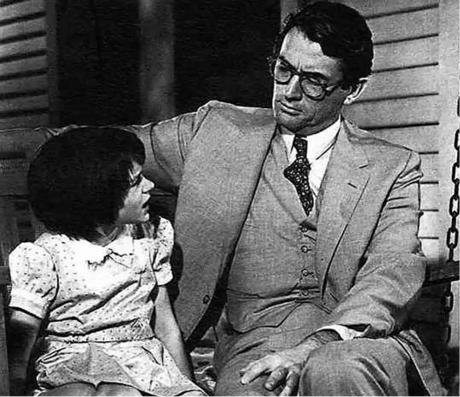 mobile white screen, the projector clicking a white light of a world that I knew and yet could never know. "To Kill a Mockingbird" opens with the joyful strains of a child humming and innocently laughing while playing with her cigar box of crayons, marbles and memories while the credits are presented. The melody of Elmer Bernstein's recurring theme sings in the background and is of such melodic quality that it lovingly sets the tone of the safety of youth and of the deep memories of innocence once systemic in childhood and lost to adolescence. And then the opening scene of the dusty hard packed dirt streets of Maycomb, Alabama (the stage for this morality play) with the measured narration by Kim Stanley as the grownup Scout (Atticus Finch's daughter and Harper Lee's alter ego), that sets the mood in the historical context of a time that lived just like each of us. It is one greatest opening film credits and scenes of any film ever made and as an innocent nine year old, flat topped small child of Jesus Christ sitting on that bare floor with my camp mates, I was captivated. 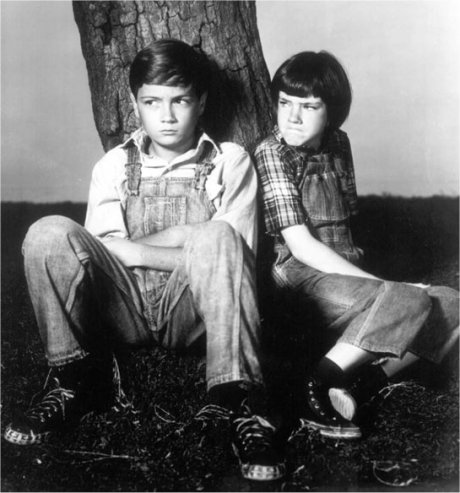 and had not Horton Foote, who won the Oscar for his screenplay that adapted the classic novel, so diligently captured the spirit of Harper Lee's childhood. She once graciously reported of Foote's adaptation, "I think it is one of the best translations of a book to film ever made."

Gregory Peck's portrayal of the thoughtful Atticus Finch (based on her lawyer father, Amasa Coleman Lee) effused the quality of a man who loved his children, his neighbors and lived his life accordingly. While it was Scout's childhood story that served as the vehicle that took us to 1932 in Maycomb, it was Atticus as the patriarchal center that lent the emotional depth that this story breathed into my young life. As I've grown older and at various stages of my maturation, I tend to see the story the same way as a child and yet differently as I have aged. As I grow older and have raised children, I tend to see the world through Atticus's eyes. Only a truly great film can grow in stature as one grows in spirit and age.

As I look at "To Kill a Mockingbird" through this prism, I see a South of manners and poverty, of gracious kindness and ignorance of caste. It was as true for me growing up in the 50's and 60's in eastern North Carolina as it was for young Scout, portrayed by Mary Badham and her brother Jem played by Phillip Alford growing up in southwest Alabama. The unequal parallels of racism and ignorance was the paramount theme in this society where the structure of class erected barriers that, as we know, has taken decades to pull down. The truly sad fact is that, while killing the racism that has plagued the South for centuries, much of what was good and decent: the manners, the legacy of kindness, the patriotism to ideals has been dulled and in order to be resurrected and burnished to its former glory it must coexist with the tenant that made America great: that all "men are created equal." 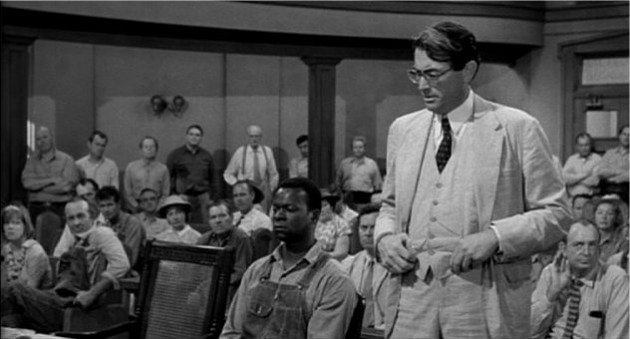 Gregory Peck as Atticus Finch argues for justice for wrongly indicted Tom Robinson, played by Brock Peters: Above. Lawyer Finch makes his summation argument for the life of Tom Robinson. Accusers Bob Ewell and Mayella Ewell sit on the left of the pleading Atticus Finch: Below.

The essence of truth must be measured along the jagged edges of the structure of reality. Harper Lee's view of that structure as it was interwoven in her youth cast a world, however imperfect, that was multi-textured and ripe for heroes such as her father who represented the "negro Tom Robinson," portrayed with impeccable dignity by character actor Brock Peters, who was unfairly arraigned for beating and raping a white woman, Mayella Ewell, played by Colin Wilcox. The symbol of the plight of Tom Robinson as martyr for society's crude prejudices served as the foil for the good men like Atticus and Sherriff Heck Tate, portrayed by character actor Frank Overton, to shine a better light on our better angels by wading through adversity to achieve a superior purpose. 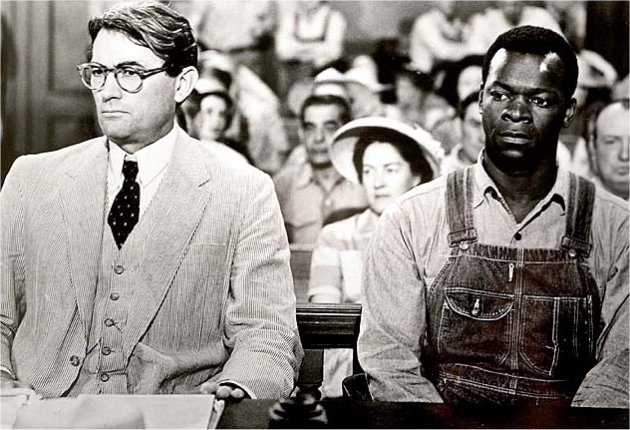 Good neighbor Maudie Atkinson explained to Jem during a melancholy moment in the aftermath of Tom Robinson's conviction, "Some men in this world are born to do our unpleasant jobs for us. Your father is one of them."

Atticus, a widower with the kind parental support of the nanny and housekeeper, Calpurnia, portrayed by Estelle Evans, raises his children to see the world in a kinder light than what 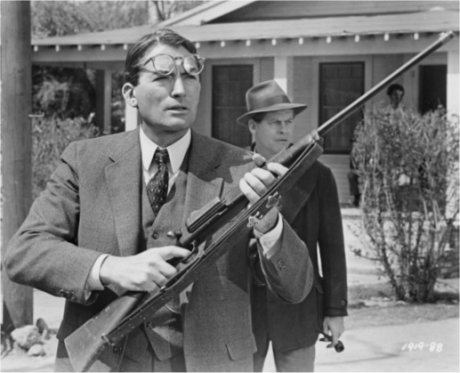 the story actually reveals. One understands his desire to inspire a certain hope in his children of a better world by being better people. Consequently, both Jem and Scout befriend a summer-time friend visiting relatives named Dill, played by John Megna, who is a bastard child. Scout has trouble understanding the father issue during their initial question and answer session with Dill, which is what children of substance always do. Jem navigates the six year old Scout through the issue without any further embarrassment to Dill and one can surely witness Atticus's stamp on the 12 year old Jem. An interesting side note is that the richly embellished character of Dill represents Harper Lee's childhood relationship with renowned novelist Truman Capote.

In Harper Lee's real world Capote was quite a bit more than a summer-time friend, who inspired Harper to express herself in script, while the tomboy Harper protected the "sissy" Truman. Remarkably, Harper Lee's one novel, "To Kill a Mockingbird," along with Capote's "In Cold Blood" were two of the most influential novels of the 60's - worldwide. They remained close friends, with Harper working with Capote to research "In Cold Blood," until his death in 1984. Harper Lee continues a reclusive lifestyle in Monroeville, Alabama as of this publication.