What the Crossed Infantry Muskets Stand For | Beaufort County Now | I truly wish that our founding fathers had been a bit more clear on what they meant when writing the 2nd Amendment but numerous contemporaneous writings clearly show their intent was for individual possession and ownership of firearms. | 2nd Amendment, Bobby Tony, Crossed Infantry Muskets, Vietnam War

What the Crossed Infantry Muskets Stand For

This series has been a long time in the hopper. I knew that sometime, I would write my memories but that was delayed for almost fifty years.  I have tried numerous times to write this narrative and have found that it was more difficult than I thought.  The memories are as clear as yesterday, so I am trying again to document that short one year and eleven months. I have tried to fact check various dates and historical events, but the memories are mine and they could be clouded by poor memory or the usual exaggerated influence of years of neglect.  Here is another chapter in my story.


What the Crossed Infantry Muskets Stand for

Many liberals and some conservatives have expressed concern over the rate of fire of the so called "Assault Rifles."  They also think the 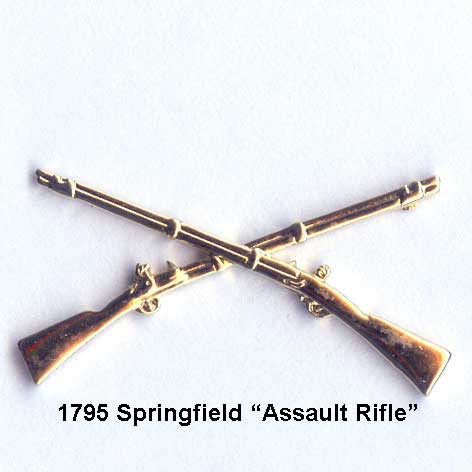 number of rounds in a magazine is somehow outside the protection of the 2nd amendment.  I truly wish that our founding fathers had been a bit more clear on what they meant when writing the 2nd Amendment but numerous contemporaneous writings clearly show their intent was for individual possession and ownership of firearms.

I suspect everyone has heard the often repeated refrain about how the muskets could only fire one round at a time and it took time to reload. This was true, but it was a result of technology progress and not a principal of law.  At the same time the 2nd Amendment was written most of the written documents were done either by hand on paper, or typesetting which required hours to compose and product. It also required an initial investment in equipment, ink and printing presses to disseminate the finished product. We have debated the Original documents from first day they were published.

"A formal debate usually involves three groups: one supporting a resolution (affirmative team), one opposing the resolution (opposing team), and those who are judging the quality of the evidence and arguments and the performance in the debate."--- Debate Basics

Like most political debates the resolution is a fluid vessel which often changes and morphs based on each side presentation and effectiveness. The debate should be clear about the subject.  Are we debating Pins, Angels or Dancing when we argue over how many "Angels can dance on the head of a Pin!" It is my belief that the founders were thinking about much more than Dancing Angels and Pins.

I think the founding fathers (Soon to be Founding Nonspecific Gender) were dealing with larger principles in their formation of the basics of our government.

I have long believed that the ownership of guns was not a right based on guns but a right based on "FIREPOWER!"  I grant that a musket of the old years was limited in its ability to send but one round down range and that the reloading took some time.  I also believe for that very reason the 2nd Amendment was written was to guarantee that the citizens could match the firepower of the oppressors if necessary.  Single shot weapons required multiple shooters. Multiple shooters are always a part of a standing army. Technology improved and the rate of fire increased along with the improvement of the instrument.

The same is true of the guarantee of the 1st Amendment.  If you will bear with me, let's just compare the Rate of Fire with the Words Per Minute concept.  Both guns and Quill Pens had their limitations in 1776.  Maybe not all understood that this would not always be the case but I am fairly sure that Benjamin Franklin understood the concept when it came to the written word. Obviously he also understood that the volume of Words make a difference in the debate since he left quite a legacy of the written word as did most of the other founders.

I was reminded about this somewhat esoteric concept when I sat down to write my Vietnam Diary for the Kids and Grand Kids. It has been 50 years in the slow cooker and I hope to complete this long delayed project this year (2018).

Long ago I was subjected to training on rapid fire weapons courtesy of the United States Army.  I have long forgotten the name of the Drill Sergeant who conducted the introductory class to weapons, but I clearly remember his basic theme. I suspect the speech was prepared and approved by higher ups in the pecking order, but his delivery was spot on for those of us sitting in that class. When I returned from overseas and took my turn as an Infantry Instructor, I tried to find the written text of the Infantry Weapons course. I was not successful so I paraphrased a recap of his introduction in my own words.  Here is an updated version of that introduction as I would give it now, embellished with the benefit of hindsight, current events and perhaps some bravado from having survived the ordeal. As I enter the 50th Year Anniversary of my Service in Vietnam, I now realize what he was trying to tell that 22 year old kid about to embark n the most memorable year of his life. . The Musket and Pen part is borrowed from his presentation.

"You will learn the nomenclature, rate of fire, proper care and cleaning of the weapons introduced in this training. You will become familiar with the disassembly and reassembly of those weapons. For those of you who have never been exposed to these weapons before, you will also lose your fear of them. Many of you country boys have had guns your whole life ready at a moment's notice. Many of you city boys have never owned or held a gun. When you get through with this course, we will go to the range and you will be trained in the actual firing, reloading and accuracy of their use. The weapon itself is nothing more than a tool. You are or will shortly become it's master regardless if you were country or city raised.

While I have been talking, most of you have not noticed that over on that table there lies a Musket, an Ink well, A Quill Pen and a Piece of Paper.  I would point out that the musket has not fired a shot, the pen has not written a word and the paper is still blank.  The ink has patiently been waiting for the writer to put it to paper.  They are nothing more than tools to be used by craftsmen. But they are the tools of Freedom which makes them the most important foundation of our country. 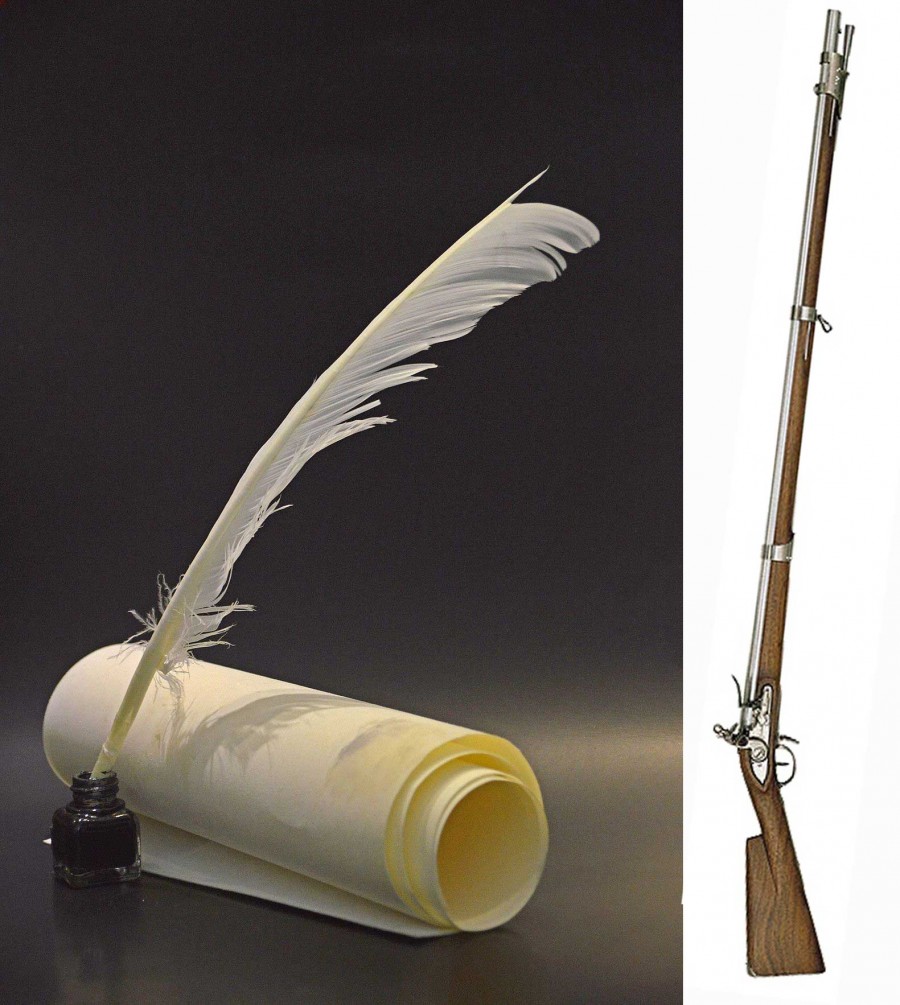 When you leave this training you will become Infantry Soldiers.  It is fitting that the symbol of the Infantry are Crossed Muskets.  The Badge represent the defense of a nation from enemies both foreign and domestic.  But the distinction between an organized Army and a group of Patriot Citizens was not lost on the founders.  Remember that at the time of the founding this country was occupied by a Foreign Army.  The founders well understood the danger of a Foreign Army occupation. They also understood the danger of a Domestic Army occupation.  That is why they gave control to Civilian authorities.

A few of you will also reach the rank of Buck Sargent. That is the 2nd lowest rank of Non Commissioned Officers represented by the Three Stipes patch or badge.  No army can function without the leadership and execution of it first line of authority; THE BUCK SERGEANT.

Some of you will experience Combat.  The third badge is the Combat Infantry Badge.  It is awarded only to those Infantry soldiers who have actually experienced combat.  That means that they have participated in combat against a hostile force and been the target of incoming bullets. The CIB separates the combatants from all the support and staff personnel. It is not awarded merely for showing up. The three symbols may very well be the most important one any soldier will ever receive. 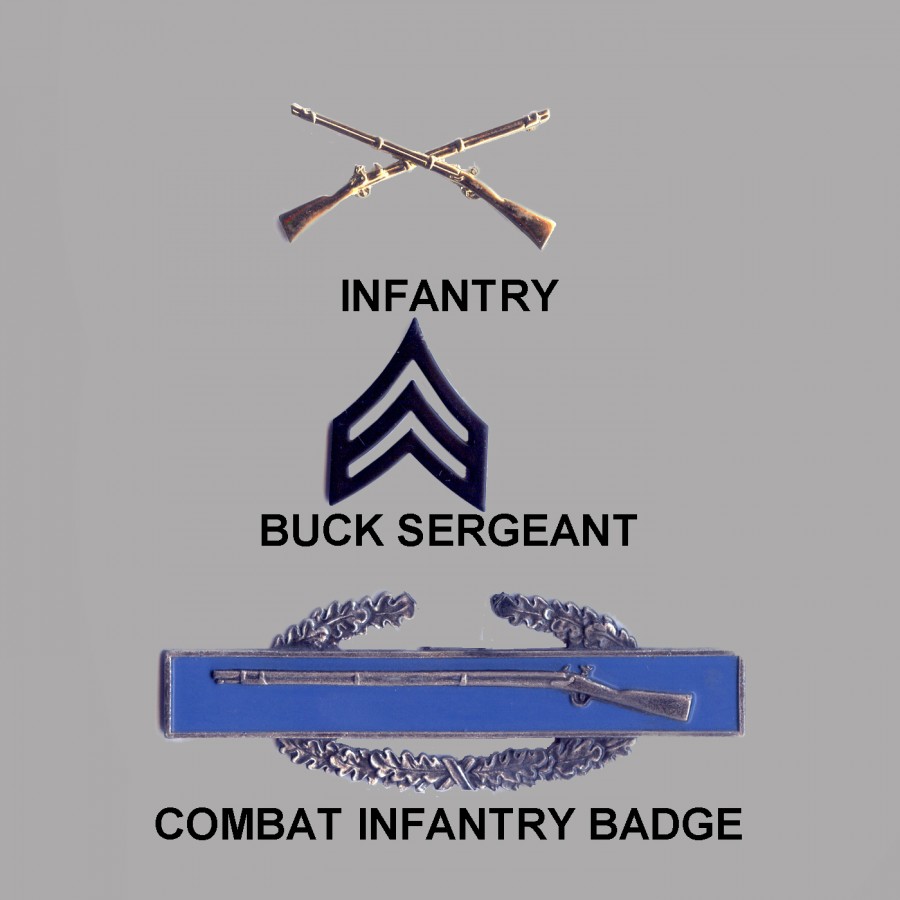 Many years from now those of you who wore all three will be able to look back with pride that you were part of the founding father's dream:  A common citizen who took up arms in defense of the country.  These three symbols may not be recognized by civilians for the depth of your commitment but other soldiers will see and understand.  For that you should be proud because you were the Craftsmen that our country is founded upon. Sgt Bobby Tony"

For those still looking for the meaning of the Crossed Rifles, here is the history:

"Crossed muskets were first introduced into the U.S. Army as the insignia of officers and enlisted men of the Infantry on 19 November 1875 (War Department General Order No. 96 dtd 19 Nov 1875) to take effect on or before 1 June 1876. Numerous attempts in the earlier years were made to keep the insignia current with the ever-changing styles of rifles being introduced into the Army. However, in 1924 the branch insignia was standardized by the adoption of crossed muskets and the 1795 model Springfield Arsenal musket was adopted as the standard musket to be used. This was the first official United States shoulder arm, made in a government arsenal, caliber .69, flint lock, smooth bore, muzzle loader. The standardized musket now in use was first suggested by Major General Charles S. Farnsworth, U.S. Army, while he was the first Chief of Infantry, in July 1921, and approved by General Pershing, Chief of Staff, in 1922. The device adopted in 1922 has been in continual use since 1924. There have been slight modifications in the size of the insignia over the years; however, the basic design has remained unchanged."   The Infantry HIstory

The meaning of the Crossed Rifles really has no hidden meaning, but for me it illustrates the willingness to take up arms to defend those "inalienable rights" that were recognized in the Declaration of Independence.

When someone tells you that somebody ought to do something about all the guns in America, you should just smile and tell them:

"SOMEONE HAS ALREADY DONE THAT,

THEY EVEN WROTE IT DOWN FOR ALL TO SEE."