My Fair Lady: the Concert

Login to Send a Private Message to Stan Deatherage
My Fair Lady came to Raleigh, but not as the musical that many have come to love. It came to Raleigh as a sparsely acted concert performed beautifully by the North Carolina Symphony. The music was the star this night, with six actors bringing as much of the flavor of the Alan Jay Lerner and Frederick Loewe musical as was possible, handicapped by the abbreviated drama, the limited props, and no staging whatsoever.

Gone were the elaborate period (early 20th turn-of-the-century) trappings of the Tony Award winning Broadway play of the late 1950's and the Oscar winning film of 1964, all originating from George Bernard Shaw's classic "Pygmalion". What remained of the musical was the music, and fine it was, with all manner of these few voices adding just the right notes from beginning to end.

Charlie Tingen takes the stage, with the North Carolina Symphony in the background, plays an ensemble role during the song "Why Can't the English": Above.    photo by Stan Deatherage     Click image to expand.

One of the six voices forming the lyrical backbone of the night's rich melody was Washington, NC native Charlie Tingen. Charlie appeared in many plays in the Washington area before majoring in dramatic arts at Coastal Carolina in Conway, SC. Tonight, on the stage of Meymandi Concert Hall in Raleigh, Charlie played the role of Freddy Eynsford-Hill, as well as other ensemble characters. 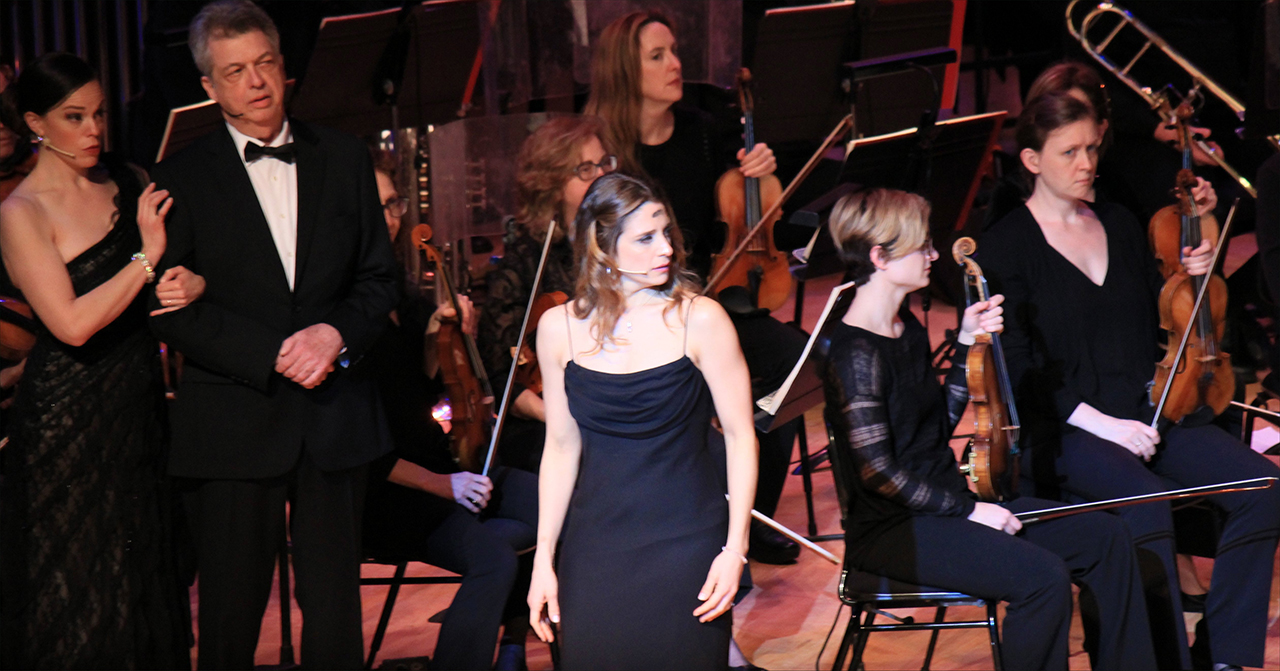 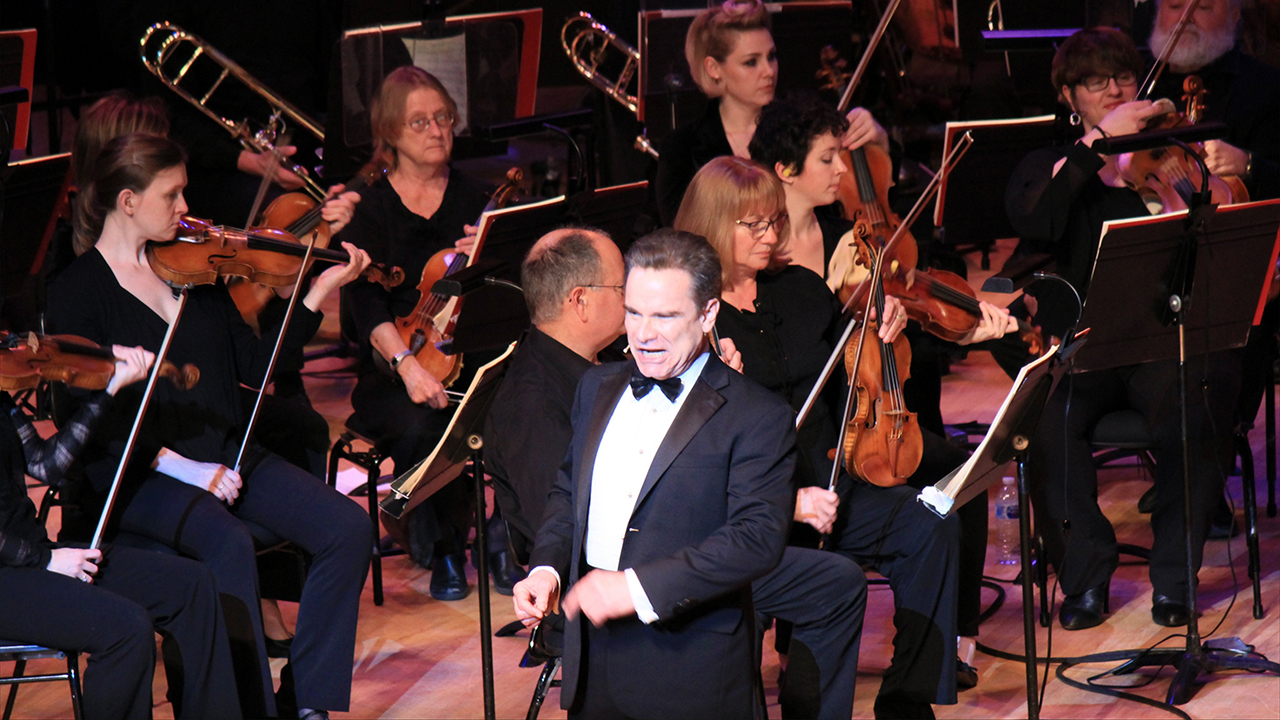 These six actors wore formal wear throughout the concert, with few props to help tell their parts, letting the melody and lyrics speak the story. 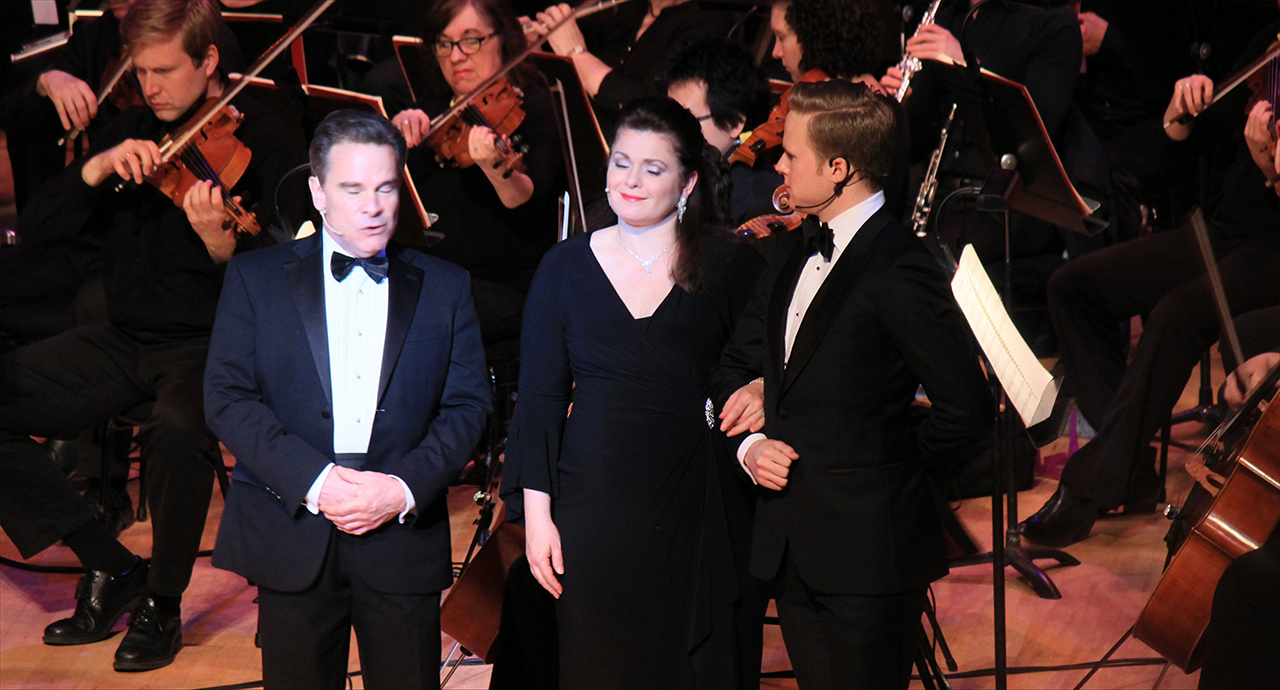 Peter Scolari as Professor Henry Higgins (left), ensemble actor /singer Michele McConnell (center), Charlie Tingen (right), with the North Carolina Symphony in the background: Above. Elena Shadow (center with grime on her face) as Eliza Doolittle sings so very well the classic "Wouldn't It be Lovely": Below.    photos by Stan Deatherage     Click image to expand. 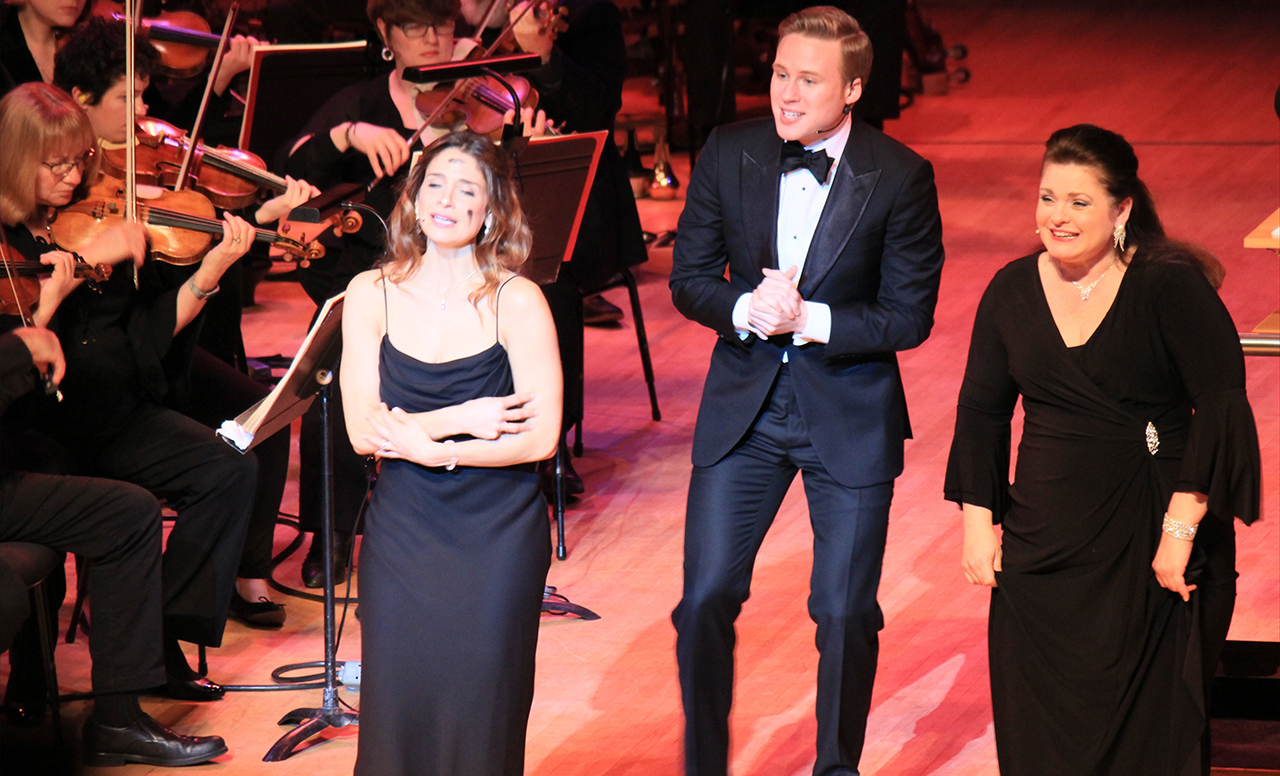 The Meymandi Concert Hall was nearly full, and there is one clear truth regarding that space for melody: The acoustics for a wide spectrum of sound was outstanding in scope. 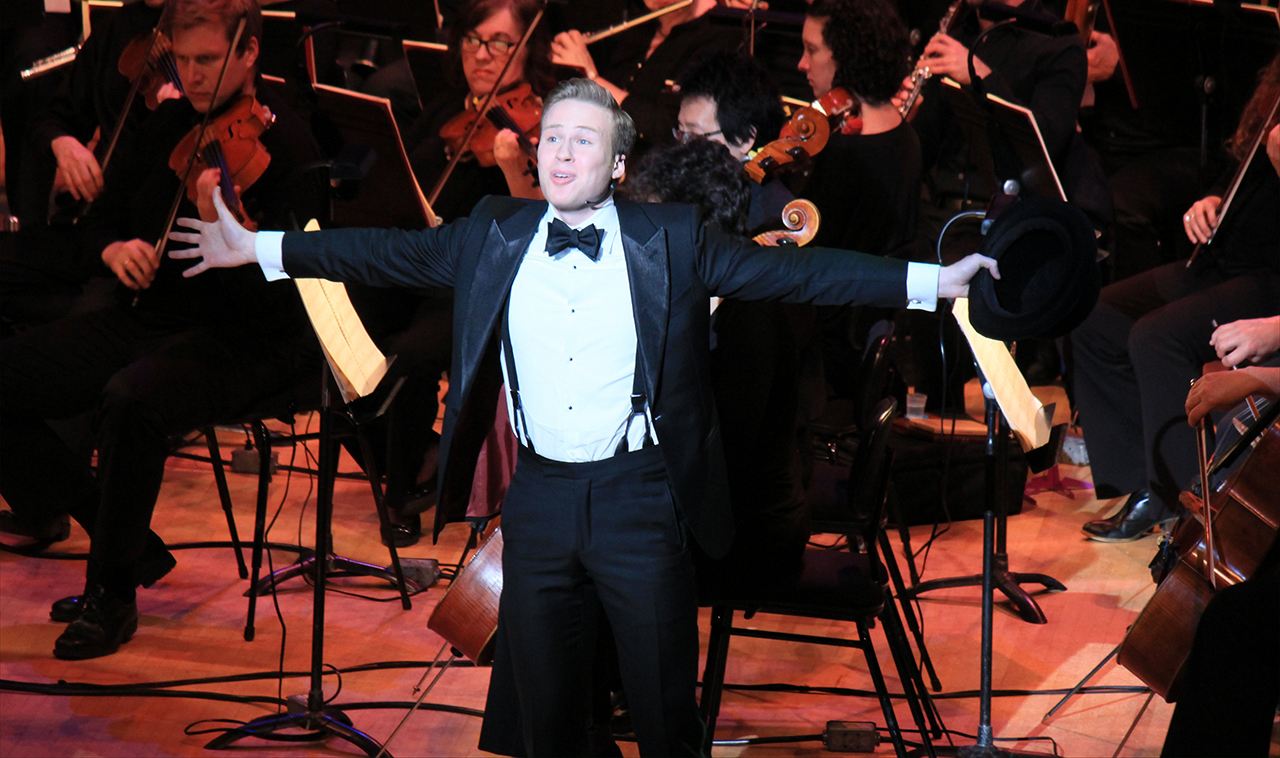 Charlie Tingen, as Freddy Eynsford-Hill , in a fine tenor voice sings his signature solo "On the Street Where you Live": Above and below.    photos by Stan Deatherage     Click image to expand. 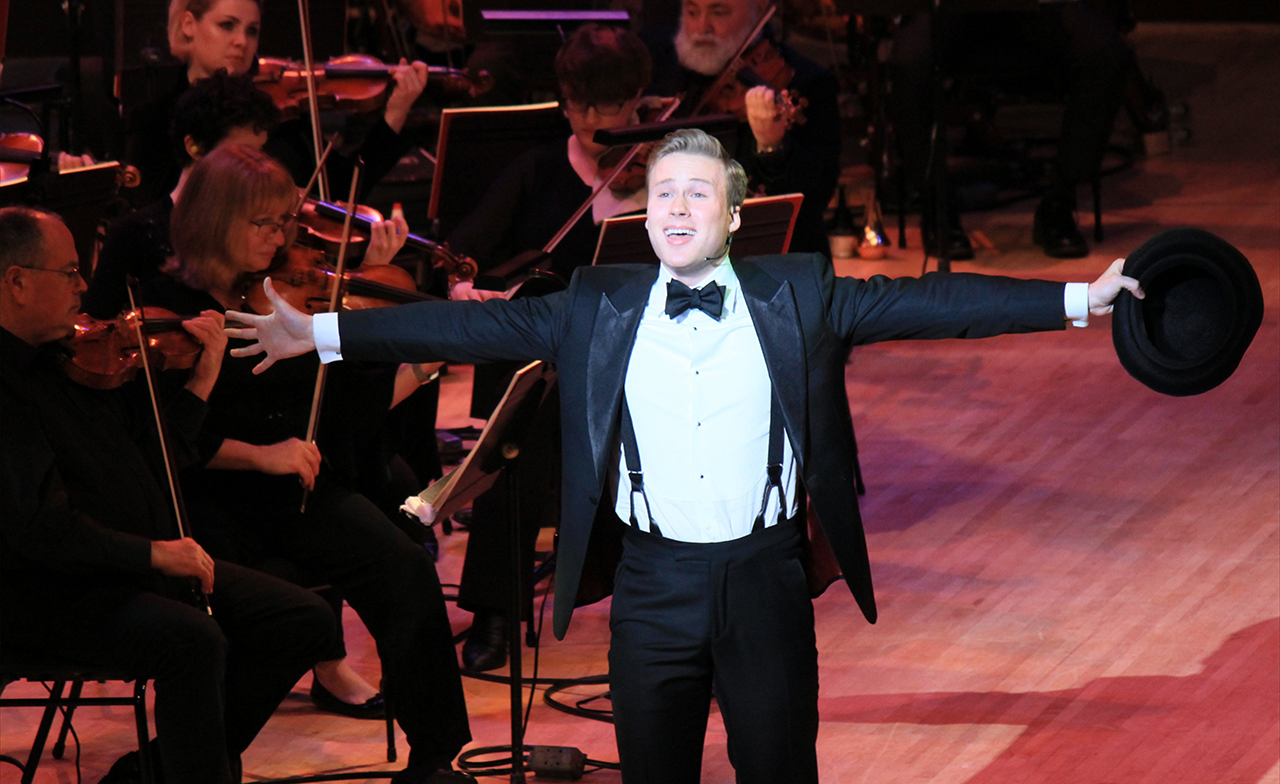 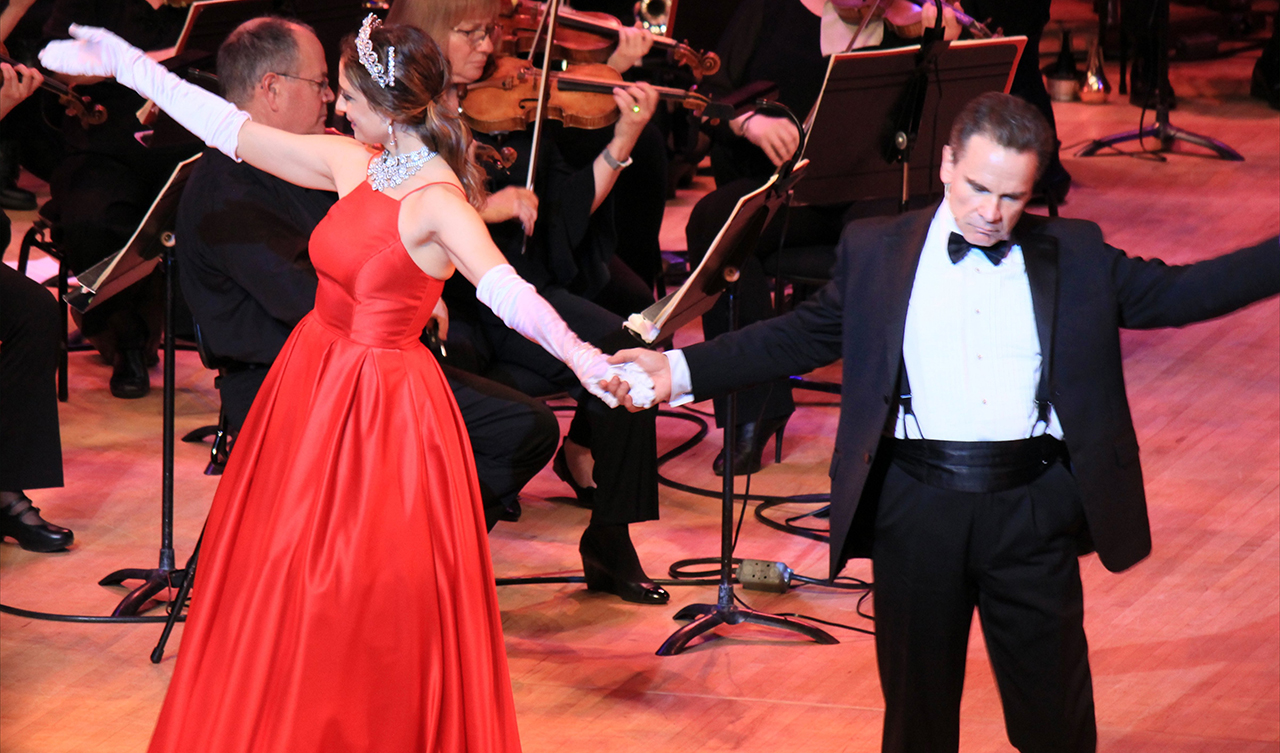 Elena Shadow (left), as Eliza Doolittle, with the Peter Scolari as Professor Henry Higgins perform "You Did It": Above. "Get Met to the Church on Time" performed by (from left to right) Charlie Tingen; Charles Edward Hall as Alfred Doolittle; Jennifer DeDominici, ensemble player; Michele McConnell, ensemble player: Below.    photos by Stan Deatherage     Click image to expand.

The singing, especially by the women, and Charlie Tingen's tenor was first rate. One could easily tell that these performers took what raw talent they were naturally born with, and then honed those voices to their fullest potential.

Anyone who knows the musical, My Fair Lady, knows that the last scene's song "I've Grown Accustomed to her Face" is that special denouement, where Professor Higgins is confronted with his human failings, and that if he is lucky, his life will be forever changed ... possibly more than Eliza Doolittle's: Below.    photo by Stan Deatherage     Click image to expand. 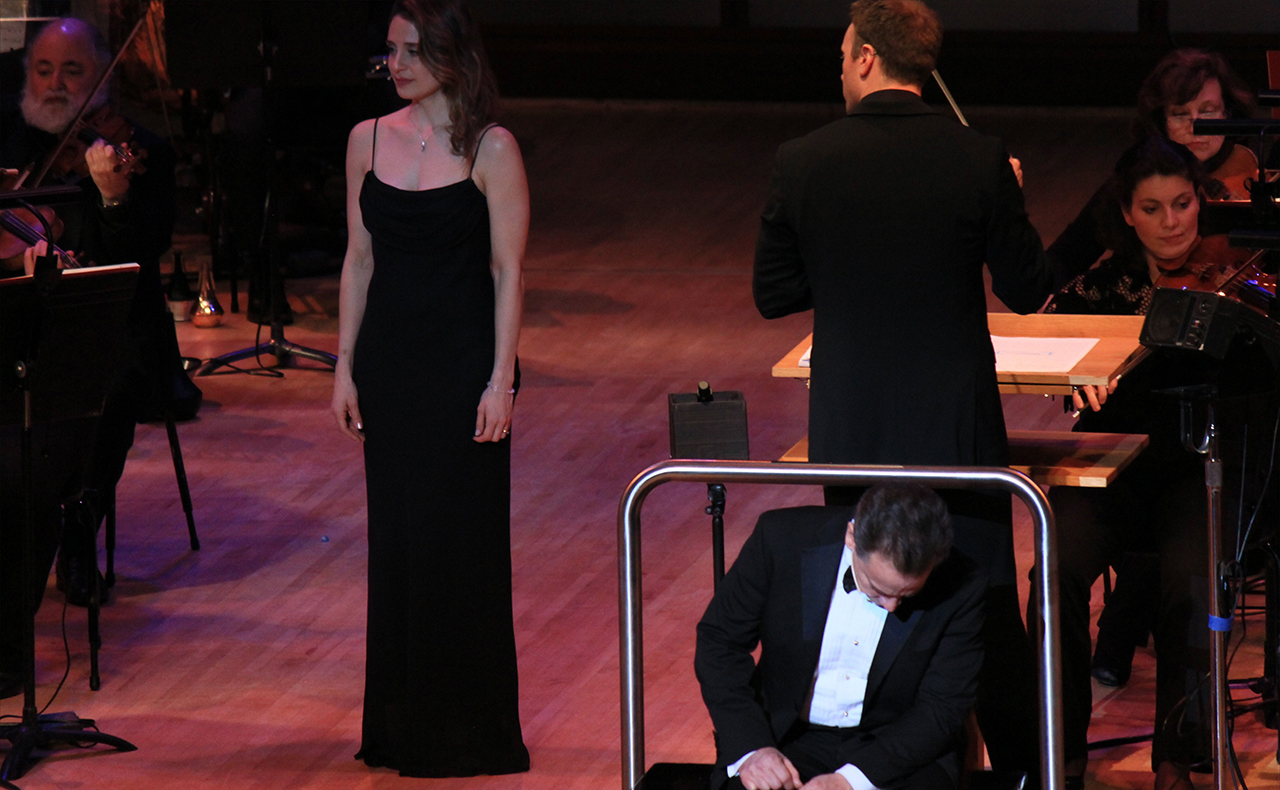