The DOJ and FBI Worked With Fusion GPS on “Operation Trump”…. (from Last Refuge) | Beaufort County Now | What we have discovered highlights the answer to those relationship questions; and also answers a host of other questions, including: Did the FBI pay Christopher Steele? Yes, but not how media has stated. | Conservative Tree House, dossier, Trump, DOJ, FBI, Peter Strzok, Lisa Page, McCabe, Fusion GPS, FISA, surveillance

The DOJ and FBI Worked With Fusion GPS on “Operation Trump”…. (from Last Refuge)

What we have discovered highlights the answer to those relationship questions; and also answers a host of other questions, including: Did the FBI pay Christopher Steele? Yes, but not how media has stated. Was the FBI connected to the creation of the Steele Dossier? Yes, but again, not the way the media is currently outlining. 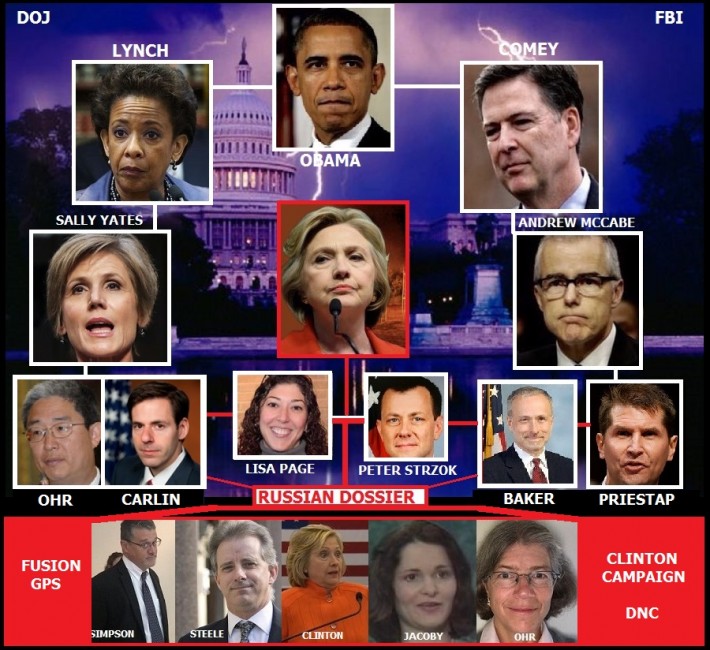 The motive within the FBI/DOJ surveillance of the 2016 campaign of Donald Trump is simple. However, to understand how they did it - the story becomes more complex. Some key background understanding is necessary.

•     First, to understand what took place in 2016 we must travel back to 2015 when Office of Inspector General (OIG) Michael Horowitz asked for approval to conduct oversight over the National Security Division of the Department of Justice; the DOJ-NSD. In 2015 Inspector General Michael Horowitz was blocked by the Department of Justice from having oversight over the DOJ-NSD. In a lengthy response to the IG's office [Full 58 page pdf HERE] Sally Yates essentially said 'all DOJ is subject to oversight, except the National Security Division.'

•     Second, to understand how FISA is used within the intelligence community it is CRITICAL to understand that IC departments centered around National Security, such as the DOJ National Security Division, or the FBI Counterintelligence Division, may use the NSA database -and FISA enabled inquires- with considerably more leeway, and less restrictions on access and use. In short, FISA "queries" from any national security department within government are allowed without seeking court approval.

During a recent hearing discussion between current FBI Director Christopher Wray and House Judiciary Chairman, Bob Goodlatte, the context is outlined. WATCH the video included in the twitter thread (posted by TrumpSoldier) below:

The NSA collects data all the time 24/7 on EVERYONE. The data the FBI wants is already there. The NSA data is transferred to the FBI database via "about queries". That is where the #FISA court comes in. They authorize the data transmission to the FBI database. To get authorization to obtain the information from the databank, the FBI submits an application to the #FISA court. The House Judiciary Committee has primary jurisdiction over the FISA court (in fact, over all the Justice Department) and they can and will get it. (They may have already gotten it)

The term warrant is used rather loosely. Regardless, here is the two-step process that occurs 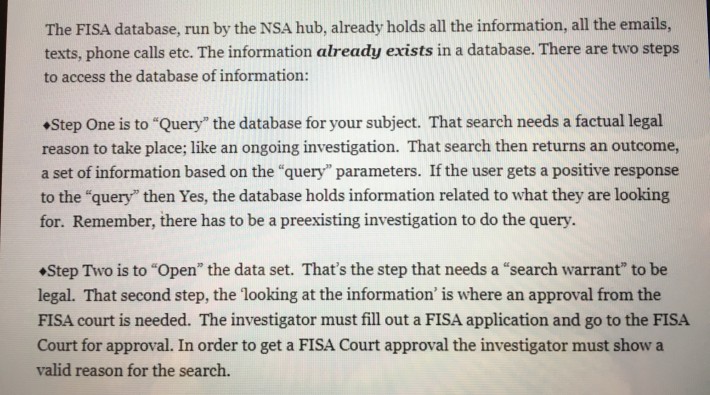 Technicalities aside, we now have confirmation that the Obama DOJ/FBI abused the system and used the NSA as a political weapon. It simply does not get any worse than that.

The scale and scope of what took place in 2016 is also contingent upon understanding how the Foreign Intelligence Surveillance Act (FISA) was being used. Specifically how *critical* exceptions for FISA-702 "search queries", without judicial warrants or FISA court approvals, were permitted.

In 2016 FISA-702(17) "About Queries" from legislatively authorized national security entities within the DOJ and FBI did NOT require FISA court approvals.

Remember this important fact as you continue reading. 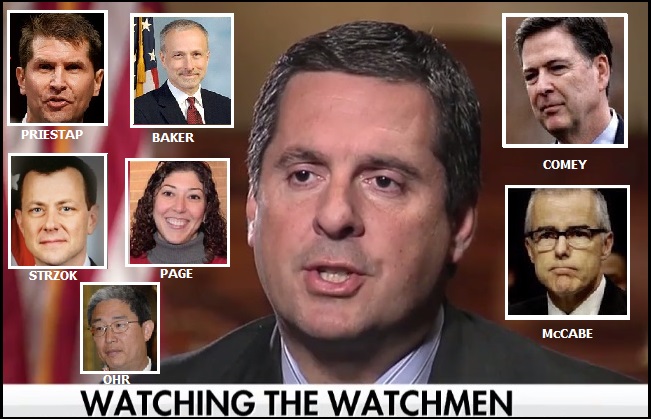 WE BEGIN: The recent stories about the 2016 DOJ and FBI counterintelligence investigation of the Trump campaign center around how the Christopher Steele 'Russian Dossier' was used by the DOJ/FBI in obtaining FISA approvals for surveillance of Trump campaign officials. Within the "Russian Dossier" back-story everyone is familiar with the relationship between Fusion-GPS, the founder of the company, Glenn Simpson, and the author of the dossier, Christopher Steele. Additionally, the relationship between the Clinton campaign and Fusion GPS is now well known.

In/around April of 2016 the Clinton campaign hired and paid Fusion-GPS. Team Clinton paid Fusion-GPS for information on candidate Donald Trump. That agreement led to Fusion-GPS hiring sub-contractor Christopher Steele, which eventually led to the creation of the 'Steele Dossier'. Yesterday, it was reported the 'Steele dossier' was used as the underlying foundation for the DOJ and FBI to seek FISA Court Approvals to monitor the communications of the Trump campaign. In essence, as of yesterday, the FBI used Clinton opposition research -via Fusion GPS- on candidate Donald Trump, to generate surveillance authority over her political opponent. That sounds bad; however, what we have discovered is worse.

Dates are critical because they build the circumstantial case within a story clouded by obfuscation and convenient FISA secrecy.

We know NSA Director Admiral Mike Rogers became aware of an issue with unauthorized FISA-702(17) "About Queries" early in 2016. As a result of a FISA court ruling declassified in May of 2017 we were able to piece a specific timeline together.


Watch this hearing testimony to hear Admiral Rogers explain the timeline: Below.

Subsequent to that FISC notification Mike Rogers stopped all FISA-702(17) "About Queries" permanently. They are no longer permitted. The full FISA Court Ruling on the notifications from the NSA is below. (Note, the subject of the Court Opinion and Memo was President Obama's spying on political enemies). And to continue the story we are pulling out a specific section [page 83, pdf] CRITICAL to understanding what was going on:

Pg 83. "FBI gave raw Section 702-acquired information to a private entity that was not a federal agency and whose personnel were not sufficiently supervised by a federal agency for compliance minimization procedures."