Published: Wednesday, January 10th, 2018 @ 9:06 am
By: John Locke Foundation   ( More Entries )
Publisher's note: The author of this post is Dan Way, who is an associate editor for the Carolina Journal, John Hood Publisher.

Stein, a Democrat, made the announcement at a joint press conference with state Rep. Jason Saine, R-Lincoln. Saine said he plans to introduce a bill in the special session that starts Wednesday to toughen state laws targeting identity theft.

Since 2005 more than 14.2 million North Carolina residents have been victimized in 4,945 security breaches. Hacking accounts for 50 percent of all unauthorized data access, and increased 3,500 percent since 2006.

Stein told Carolina Journal after the press conference North Carolina has sound identity theft laws, but must enforce them. Saine's bill "will be a gold standard piece of legislation across the entire country."

Stein would not specify how much it might cost to enforce provisions in the bill.

"All entities out there need to be constantly vigilant about what technology exists that the thieves can exploit to steal our information, and they need to be one step ahead," Stein said. "That's just a cost of doing business, whether it's the government or the private sector."

During the press conference he said a security breach at Uber, the app-based transportation company, exposed personal information of 57 million drivers and riders.

Stein sent a demand letter to Uber for information about the cyber crime, saying he would take legal action if necessary.

Stein is on the executive committee of 48 state attorneys general investigating the Equifax breach that occurred last year from May to July. That case accounted for many of the more than 5 million North Carolinians victimized last year by data breaches. The Equifax breach affected 143 million Americans.

"That work is ongoing, and I will take whatever legal action is appropriate" against the company, Stein said. He has sent letters to Equifax demanding more information on how the unauthorized intrusion occurred, and what the company is doing to protect affected consumers. 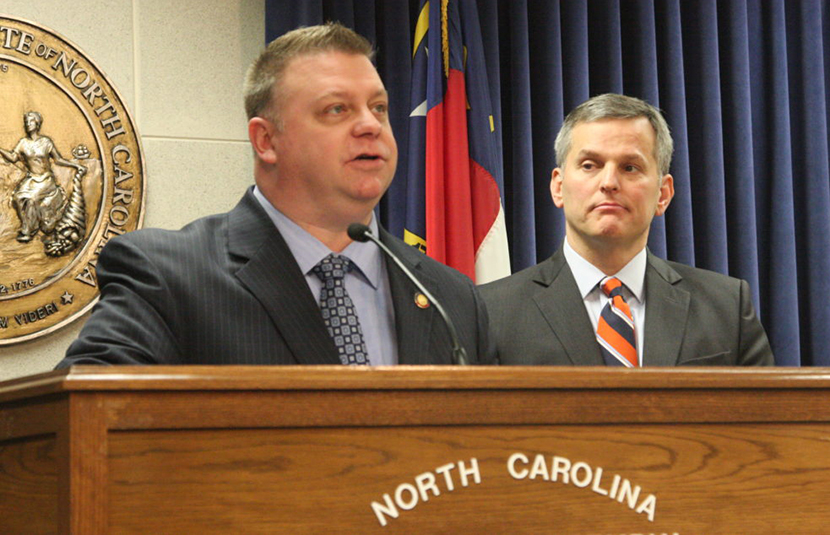 He sent letters to Experian and TransUnion, the other two major credit reporting bureaus, seeking information on their security processes, and how they plan to protect consumers' private information.

North Carolina law requires all entities experiencing a breach to notify affected consumers and DOJ. But the language is ambiguous, stating notification must be made "within a reasonable amount of time." Saine's bill requires notification within 15 days of a breach.

Equifax waited 40 days after learning of its breach to notify consumers. Uber waited more than a year.

CJ earlier questioned the "reasonable time" language in reporting on a state Department of Health and Human Services data breach, and asked whether state agencies were notifying victims promptly. There were 250 data breaches among state agencies last year, a record.

"These delays are unacceptable. Every day a consumer is unaware of a breach is another day that a criminal can be accessing and using your personal information to take out credit in your name, and ruin your good credit standing," Stein said.

Saine said his legislation still was being drafted at press time. But he said its provisions include:


Under the legislation, any company experiencing a data breach that did not maintain reasonable security procedures would violate the Unfair and Deceptive Trade Practices Act. Each victim would represent a separate violation.

Doug Dickerson, state director of AARP North Carolina, said Saine's bill is long overdue. Cyber thieves are increasingly targeting senior citizens because they tend to have more money in more accounts than young people, and aren't as savvy about protecting their data.