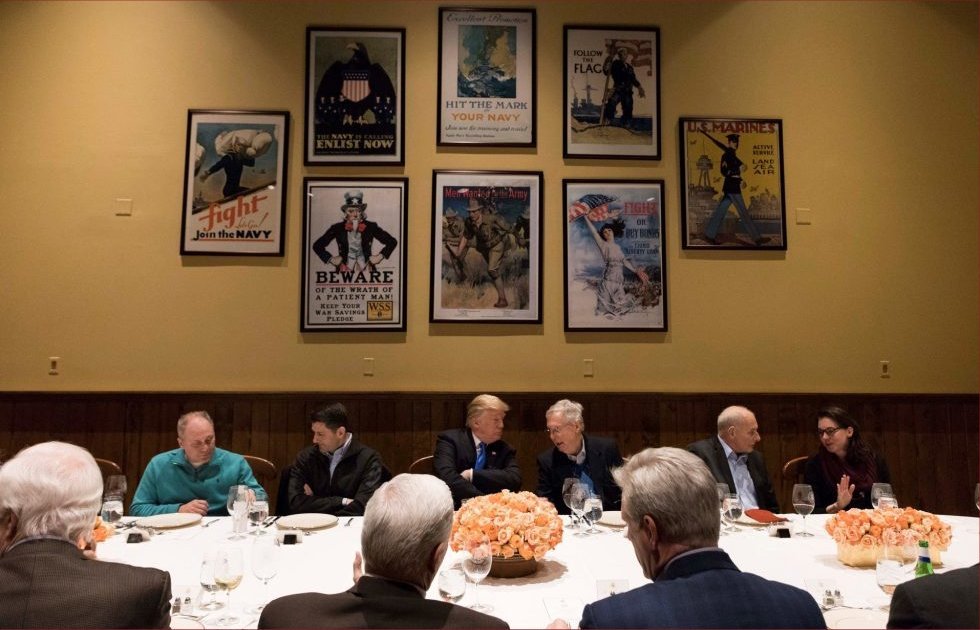 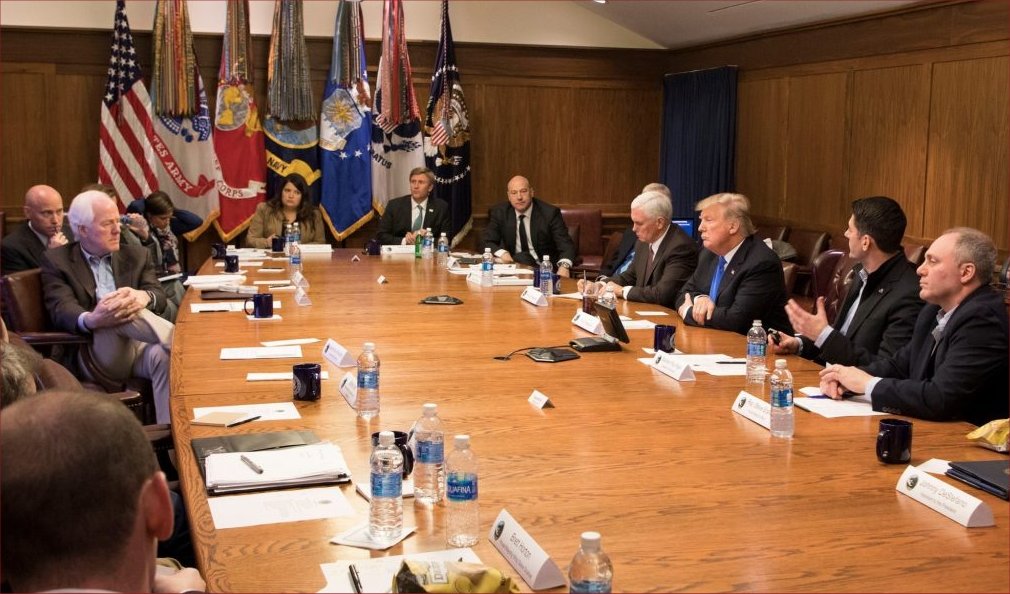 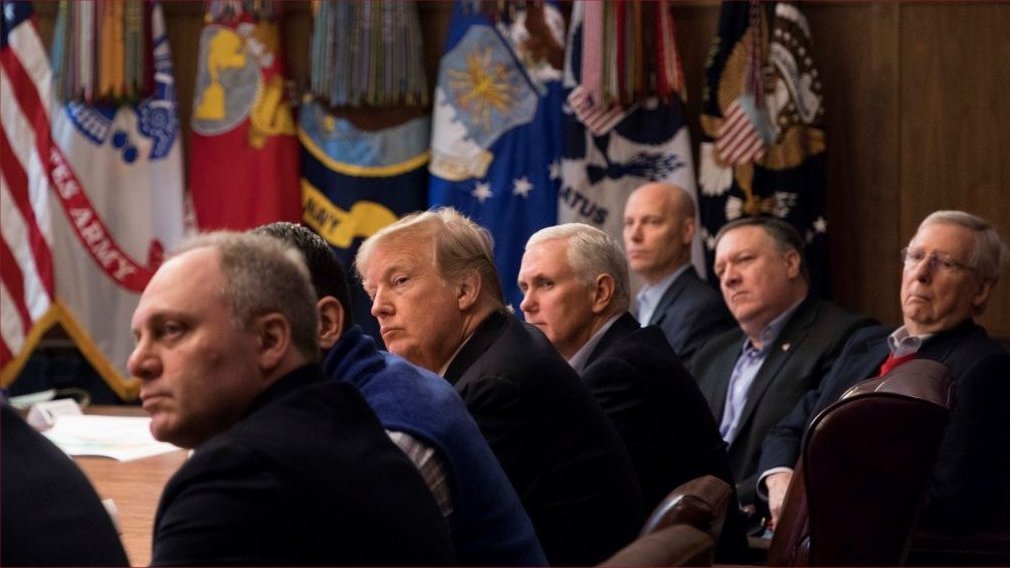 THE PRESIDENT: Thank you very much. It's great to have you at Camp David - a very special place. We started, as you know, yesterday afternoon. We had a couple of incredible meetings. It's a feeling here that you don't have in very many places. There was a bonding. There was a - we got a lot of work done, a lot of great work for the people.

Security discussed, infrastructure discussed, military and all types of military situations and applications discussed. General Mattis is here, General Kelly - a lot of good military input. Very important. Discussed funding for the military, which is so important.

So we are very well prepared for the coming year. We finished very strong. One of the things we are discussing and discussing very powerfully is drugs pouring into this country and how to stop it. Because it's at a point - over the last number of years, it's never been like this. We've never had a problem with drugs like we do, whether it's opioid or drugs in the traditional sense. It's never been like it is.

And we are going to do everything we can. It's a very difficult situation, difficult for many countries. Not so difficult for some, believe it or not. They take it very seriously and they're very harsh. And those are the ones that have much less difficulty. But we are going to be working on that very, very hard this year. And I think we're going to make a big dent into the drug problem.

With that, I think what I'll do is ask Majority Leader Mitch McConnell to say a few words. Then, I'll have Paul Ryan. And we'll - perhaps you'll have some questions for some of the folks. We have a great group of talent. And I will tell you, the meetings, again, were really, perhaps, transformative in certain ways. We're doing things and we have things planned for next year.

One of the things Mitch said - and he said it very well - was it's going to be tough to beat the year we just left because what we had last year was something very special, especially to cap it off with the tremendous tax cuts and tax reform. And don't forget ANWR. And don't forget the fact that the individual mandate - such a horrible thing for so many people - was terminated. So it's very, very tough.

But I'd like to ask Mitch - come up, say a few words, please.

LEADER MCCONNELL: Well, thank you very much, Mr. President. As you suggest, last year would be a tough year to top.

If you are like those of us here at the podium, you'd like to see America be a right-of-center country. From a right-of-center point of view, 2017 was the most consequential year in the many years that I've been here in Congress. The President's spectacular nominee for the Supreme Court; 12 circuit judges, the most in the first year of any President since the circuit court system was set up in 1891; not to mention deregulation; and then topping it off with the most consequential boost to our economy through this tax reform bill - was an astonishing year.

But it's time to look forward. Mr. President, I want to thank you for inviting us all up. We had a great planning session for 2018. We hope that 2018 will be a year of more bipartisan cooperation. And the President's agenda, much of which he just referred to, are things that we believe there would be a significant number of Democrats interested in helping us accomplish.

And so, Mr. President, thanks for the opportunity to be here. We're excited about the new year, and ready to get to work. Thank you.

SPEAKER RYAN: Well, I, too, Mr. President - I want to thank you for inviting us here to Camp David. I'm particularly pleased with the fact that we had an extremely productive conversation with the President and his team yesterday about how we go forward in 2018.

We have big things to do for the American people. We're excited about getting to work on that, and as both the President and the Leader said, we had historic achievement in 2017 that we want to build on - historic achievements that we believe will get our economy growing much faster.

And what we want to work on in 2018 is making sure that everyone enjoys the economic growth that is to come. We have people who are sidelined in society that need to get out of poverty and into the workforce. So we want to focus on making sure that we can close that skills gap, that opportunity gap, so that everyone can get the kind of life and the career that they can get in this country - tap their potential.

We'vegot issues such as infrastructure that we want to attend to. We want to make sure that Secretary Mattis and our military have the tools and the resources that they need to keep us safe.

So we have a very bold agenda for 2018. We think this agenda is one that will appeal to everyone in-between - between Democrats and Republicans, independents. And so we're excited about the progress that has already been made, and we're very excited about what we have in store for us for 2018. Thank you.

THE PRESIDENT: Thank you, Paul.

THE VICE PRESIDENT: Thank you, Mr. President. 2017 was a year of extraordinary accomplishment. And the congressional leaders who are gathered here were incredible partners with this President and our entire administration in advancing the interests of the American people - rebuilding our military, supporting law enforcement, historic regulatory reform, appointments to our courts to uphold the rule of law and the Constitution from the Supreme Court to courts at every level, and of course historic tax reform, repealing the Obamacare mandate, and opening up American energy from Alaska to around the globe.

The President's policies have been achieving extraordinary results. Nearly 2 million new jobs created. Unemployment at a 17-year low. Our economy is already growing at a pace that most economists didn't predict would happen for years - 3 percent. And we're looking to exciting predictions for 2018.

But as the President said at the close of 2017, we're just getting started. The President convened the congressional leadership gathered here with members of our Cabinet to outline the President's priorities for the coming year. Those include a budget agreement; investment in our military to truly rebuild and make the strongest military in the world even stronger still; immigration reform and enforcement; the construction of a wall and border security; as well as dealing, as the President just said, with the issue of DACA.

We truly do believe that there are opportunities after our discussions this weekend for bipartisan work on a broad range of issues from infrastructure to workforce to vocational education. And I can say, I'm even more confident, after this weekend's discussion, that, with the President's leadership and with the strong leadership in the Congress, we're going to keep delivering for the American people in 2018 and we're going to create a stronger and more prosperous America.

THE PRESIDENT: Thank you very much, Mike.

Any questions for the group?

Q Mr. President, I didn't hear any mention here of welfare reform. Is that something that is still on the agenda for 2018?

Q Mr. President, you were talking about the policy issues that you all were focusing on the last few days here at Camp David, but this morning you were tweeting about your mental state. Why did you feel the need to tweet about that this morning?

THE PRESIDENT: Well, only because I went to the best colleges for college. I went to a - I had a situation where I was a very excellent student. Came out and made billions and billions of dollars. Became one of the top businesspeople. Went to television and, for ten years, was a tremendous success, as you probably have heard. Ran for President one time and won.

And then I hear this guy that does not know me, doesn't know me at all. By the way, did not interview me for three - he said he interviewed me for three hours in the White House. It didn't exist, okay? It's in his imagination.

And what I was heartened by - because I talk about fake news and the fake news media - was I - really, was the fact that so many of the people that I talk about, in terms of fake news, actually came to the defense of this great administration and even myself because they know the author and they know he's a fraud.

And when I saw some of the people say - and you look at some of his past books. He did a book on Rupert Murdoch. It was a terrible exposé and it was false. So much of it was false. I consider it a work of fiction and I think it's a disgrace that somebody is able to have something, do something like that. The libel laws are very weak in this country. If they were strong, it would be very helpful. You wouldn't have things like that happen where you can say whatever comes to your head.

But just so you know, I never interviewed with him in the White House at all. He was never in the Oval Office. We didn't have an interview. And I did a quick interview with him a long time ago having to do with an article, but I don't know this man. I guess sloppy Steve brought him into the White House quite a bit, and it was one of those things. That's why sloppy Steve is now looking for a job.

Okay, who else do you have? Yes.