Last week, with bipartisan support we voted to override Gov. Cooper's veto of legislation that provides voters more choices at the ballot box by increasing ballot access for smaller political parties and unaffiliated candidates for many statewide and local elections. Senate Bill 656, the Electoral Freedom Act of 2017, also improves efficiency and cuts costs associated with expensive runoff races, by lowering the percentage of votes a primary election candidate must receive to be declared the winner to 30 percent rather than 40 percent. Additionally, it allows lawmakers time to conduct a thorough and deliberate study of North Carolina's system for judicial elections by directing that, for the 2018 elections only, judicial candidates will run during the general election alone, with a filing period in June.


In recognition of October as Domestic Violence Awareness Month in our state, last Tuesday, Oct. 17, I presented Ruth's House, a Beaufort County domestic violence not-for-profit organization, a state grant in the amount of $100,000 to assist victims of domestic violence. We must continue to work together to break the cycle of domestic violence and its impact on North Carolina families.

"Senator Cook continues to champion the survivors of domestic violence and we are grateful for his consistent efforts on their behalf," said Valerie Kines, executive director of Ruth's House. "In our crises-centered work, the Senator's support has been a stabilizing factor, allowing us to continue empowering and equipping DV survivors and their children."

Ruth's House is dedicated to eliminating domestic violence in Beaufort County. It operates a safe house and offers a 24-hour hotline. Other services available to both women and men include safety planning, counseling, court advocacy, life skills training, coordination with other county services to meet needs such as job training, and other services tailored to meet the needs of individual clients. For additional information about Ruth's House, please call (252) 946-0709.


#OnThisDay in 1911, Orville Wright returned to Kitty Hawk to set a world record for the longest unpowered flight at 9 minutes, 45 seconds. This was 8 years after Orville and his brother, Wilbur, achieved the first controlled, sustained flight in a heavier-than-air craft on that cold morning of December 17, 1903, in the Outer Banks of North Carolina.

The Wright Brothers built their planes and taught themselves to fly gliders and powered airplanes by ingenuity, discipline, persistence, and optimism. They exemplified many of the qualities that make America great. We recognize that in the history of mankind we have rarely witnessed a more powerful innovation that changed global society so rapidly and so dramatically. 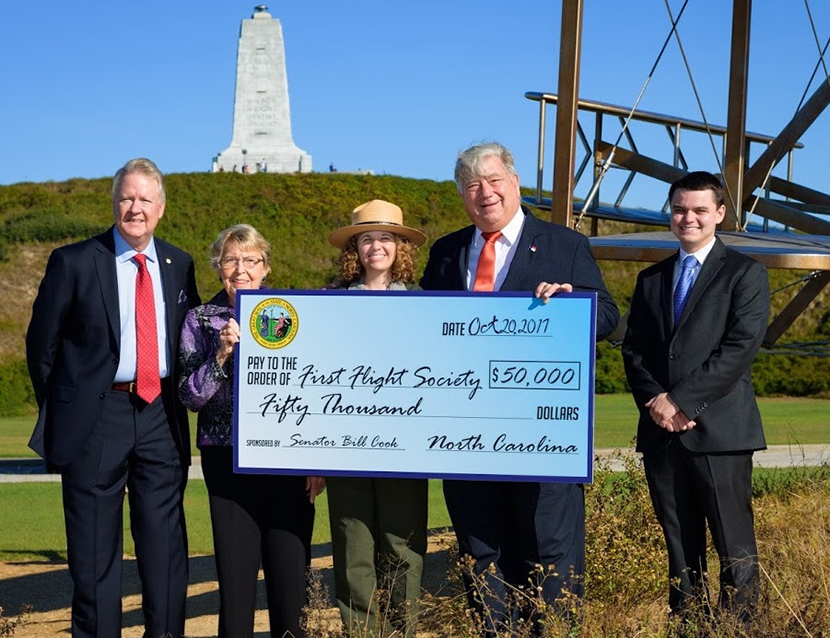 (Shooters At The Beach Photo)

The location of mankind's first successful powered flight remains open to the public as the result of a group of individuals who in 1926 joined together to form what is now the First Flight Society - the oldest non-profit organization in Dare County. The First Flight Society is devoted to fostering and promoting public awareness of a wide-spread interest in the origin, history, and future of flight, and to memorialize Orville and Wilbur Wright.

Thus, last Friday, Oct. 20th, at the Wright Brothers National Memorial in Kill Devil Hills, N.C., it was my honor and distinct privilege to announce a special budget appropriation in the amount of $50,000 to the First Flight Society. Pictured above, left to right, are First Flight Society past presidents Michael Smith and Geneva Perry, Nation Park Service - Outer Banks Group representative Sarah Blizzard Merrill, myself, and my legislative assistant and longtime member of the First Flight Society Jordan Hennessy.


Along with Representative Beverly Boswell we presented Angie Brady-Daniels our state's highest honor and award - the Order of The Long Leaf Pine award at the Outer Banks Seafood Festival last Saturday, Oct. 21. Angie recently retired from the Outer Banks Chamber of Commerce after 30 years of dedicated service. Angie was joined by her husband, Ken, and two of their three children. Angie loves the Outer Banks community and will be the first to volunteer to help an organization or a friend in need.


North Carolina is the home of several United States Coast Guard stations, and in 1917 the U.S. Coast Guard constructed the Wash Woods Station in North Swan Beach in the 4x4 area of Currituck County. Records indicate that the station remained active until officially decommissioned in late 1954 or early 1955. Thanks to Clark Twiddy and his family for preserving and restoring the Wash Woods Station. Pictured above, left to right, Clark Twiddy, Congressman Walter B. Jones, Barbara St. Amand and myself.


More than 500 cities and towns across North Carolina have started receiving their allocation of more than $147.6 million in State Street Aid, also known as Powell Bill funds from the N.C. Department of Transportation. These funds/grants will support projects selected by local government such as resurfacing and repairing roads, and enhancing existing infrastructure.

The 2015 budget increased the amount of Powell Bill funding to $147.6 million per year, as opposed to past years when funding was in part determined by gas tax revenue. The fund is named for Junius K. Powell, a former state senator and mayor of Whiteville, who was a primary sponsor of the 1951 bill to help the state's cities with urban road problems. The first allocation of Powell Bill funds was for $4.5 million and was distributed to 386 cities and towns.