Forest not on Board with DPI lawsuit | Beaufort County Now

Lt. Gov. Dan Forest, a member of the State Board of Education, opposes the lawsuit the board announced it will file challenging the constitutionality of House Bill 17, a measure passed in mid-December by the General Assembly reorganizing several aspects of state government Dan Forest,Board of Election,North Carolina,Lieutenant,DPI,Department of Public Instruction
Home
Categories
Login

Forest not on Board with DPI lawsuit

Lt. Gov. Dan Forest, a member of the State Board of Education, opposes the lawsuit the board announced it will file challenging the constitutionality of House Bill 17, a measure passed in mid-December by the General Assembly reorganizing several aspects of state government, including the duties of the state board and the superintendent of public instruction.

In a press release, Forest said a lawsuit would make dealings between the board and the superintendent "unnecessarily adversarial rather than working together to do best for what is best for the students of North Carolina. I opposed the bringing of a lawsuit and will continue to work to see that this issue is resolved how it should be - through collaboration among those of us with the same goals, rather than by a panel of judges."

Forest is a Republican, along with the board's leaders, Chairman Bill Cobey and Vice Chairman A.L. "Buddy" Collins.

The board announced plans for the lawsuit on Wednesday following a closed-session meeting. It was the second straight week the board met in a hastily called manner behind closed doors to discuss its legal options. 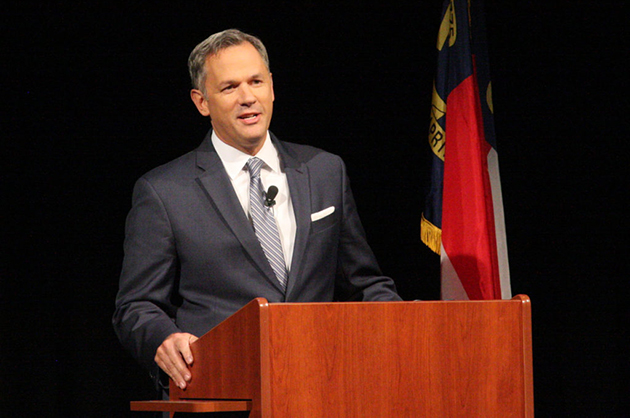 Cobey expressed several board members' concerns about the constitutionality of the measure in mid-December with Carolina Journal, highlighting provisions that would place newly elected Superintendent Mark Johnson, also a Republican, in charge of hiring and firing SBE staff and handling contracts, among other new duties.

"We [don't like] the fact that we would have nothing to say about the top of administrators in the department," Cobey said. "We believe we have the right to determine that, since the superintendent is our chief administrative officer, and we are charged in the constitution with supervising and administering a free public school system."

The state constitution says the SBE's role is to "supervise and administer the free public school system, and the educational funds provided for its support. ..." The superintendent is "the secretary and chief administrative officer of the State Board of Education."

State Senate leader Phil Berger, R-Rockingham, issued a statement yesterday calling on the board to drop its plans to sue, saying the lawsuit would fail.