Thanksgiving as a holiday just makes profound sense. It is one of the Unites States's oldest holidays and is emblematic of who Americans are ... or maybe were. Thanksgiving, Occupy movement, Norman Rockell's Thanksgiving, Pilgrim, Governor William Bradford, Hurricane Irene
Home
Categories
Login

Login to Send a Private Message to Stan Deatherage
Thanksgiving as a holiday just makes profound sense. It is one of the Unites States's oldest holidays and is emblematic of who Americans are ... or maybe were.

As of late, we've seen a small, but vocal, segment of Americans show a much greater initiative to whine rather than to work. We 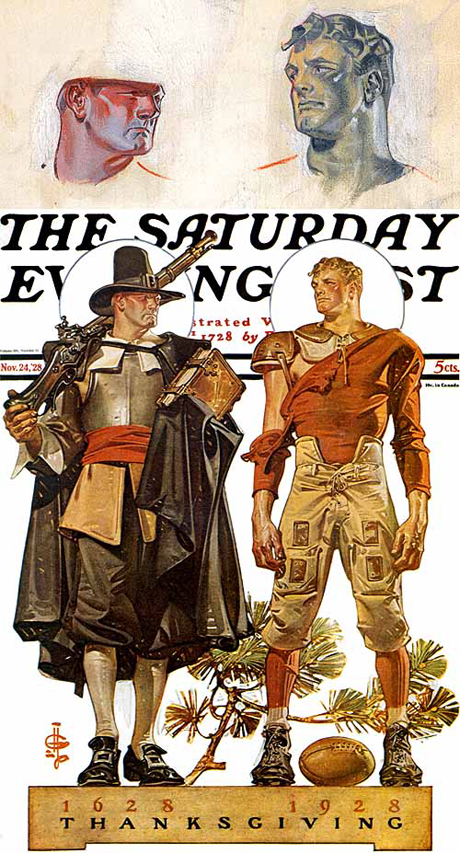 Norman Rockwell's Thanksgiving, circa 1928
see students, slackers, anarchists, Socialists, and yes, Big Labor, in the Occupy movements in the 24 hour news cycle, yet there are hardworking, near exclusively Mexicans, who are hopefully legal, restoring roofs all over the eastern North Carolina in the wake of the Hurricane Irene devastation, here in Autumn, 2011. What is wrong with this picture here?

Obviously, there is a huge disconnect with some Americans as to what is expected of the individual in a truly free society.

Shortly after the 102 Pilgrims, nearly half puritans, landed at Plymouth Rock in 1620, rather than the intended Jamestown, Colony of Virginia, they set up a communal society where they would be free. It did not work as was planned.

Long before the systemic economic problems of present day Europe, the horrible initial year of the Pilgrims was one of the the first signals that Socialism does not work.

In the early days of this fledgling colony that would become New England, colonists were allowed to work to gather food, build shelter, or to pursue other interests. What eventually occurred is that more than half of the colonists pursued the direction of other interests, and the sustenance to continue the colony could not be sustained. Come the first New England Winter, many within the colony froze or starved to death - a completely untenable position for a colony to be continued.

Governor William Braddock, whose sole charge was to sustain the colony, decreed that families would be given a plot of raw land, and their survival would be determined by their willingness to work, to persevere. In short: Your don't work, you don't eat.

Within a short two year window of time, and with the help of the indigenous Wampanoag Tribe, the remaining Pilgrims had built the foundation for their very survival. They were relatively warm in the frigid New England Winters, and they had a bounty of food after the 1623 harvest, which they shared with each other and the Wampanoag people, who, in part, provided for their survival. 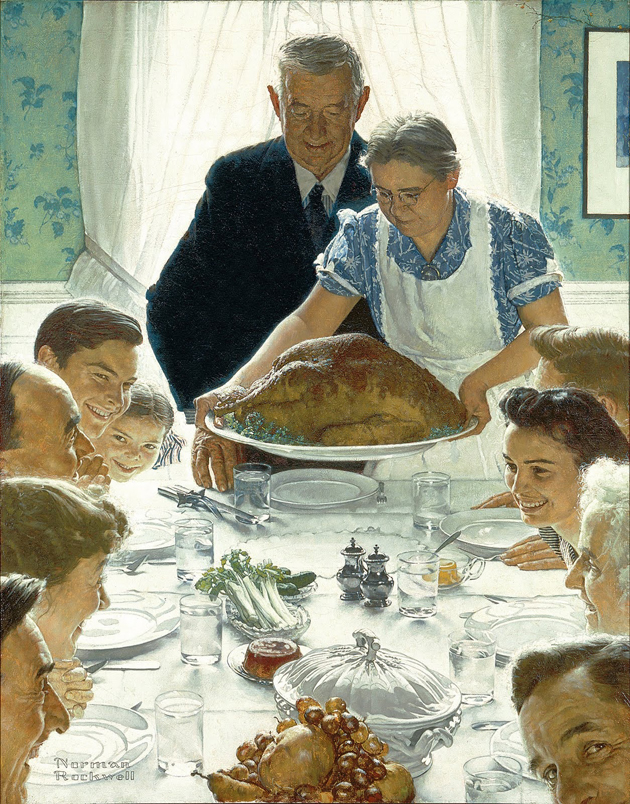 Norman Rockwell's Thanksgiving, a festive segment of the Four Freedoms series - "Freedom from Want," circa 1943.

Years later in present day America, we celebrate this tradition of being thankful for the bounty, that has long been the promise of being an American, on the fourth Thursday of November. This established date for this hallowed day of thanks was set, during President Franklin Roosevelt's administration, on December 26, 1941. Previously, the United States of America celebrated Thanksgiving on the last Thursday of November since 1863, when that date was set during President Abraham Lincoln's administration.

Americans, who have always worked hard and have much to be thankful for, celebrate this day for the promise that their freedom insures. Hopefully, our vast majority of Americans will continue to understand that there will always need to be sacrifice to sustain that freedom.
poll#27
Will you be traveling more that 50 miles to be with family on this Thanksgiving - 2012?
17.11%   I will be traveling more than 50 miles
75%   I will be traveling less than 50 miles
7.89%   It's not important
76 total vote(s)     Voting has Ended!