In search of the perfect Vietnam Metaphor - Part I | Beaufort County Now | I recently had a chance to reconnect with a fellow Combat Brother after 48 years.

In search of the perfect Vietnam Metaphor - Part I

Login to Send a Private Message to Bobby Tony
These Vietnam articles have been somewhat cathartic for me. It gives me a chance to write the memories largely for an audience I do not know but requires a more disciplined thought process than just telling a story because it will be somewhat permanent. None of the Vietnam series of articles on BCN have been circulated to any of my friends or family (except TMC). I think writing anonymously encourages a more honest story. - Bobby Tony

In Search of the perfect Vietnam metaphor Part II

I recently had a chance to reconnect with a fellow combat brother after 48 years. Back in August he sent me an email (my email address is on the unit web site) and said he would be traveling in their RV through my area in October and he wanted to reconnect. As the time approached, I began to have some trepidation's about the reunion. Like many veterans of Vietnam, I had made my peace with the war. I had finally also gotten to the point where I could openly discuss certain events that were and always be vivid in my memory. 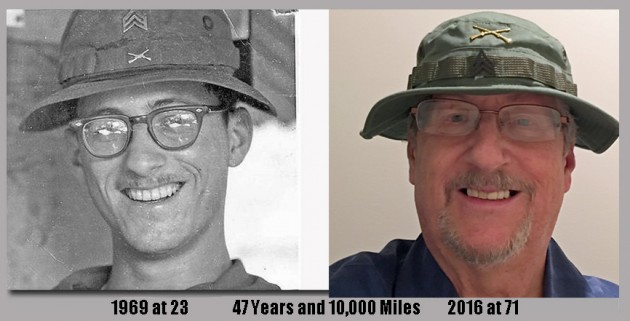 Then and now, thankful I can still smile.

But to actually confront the reality of the memories by meeting a former buddy who walked the same paths and slogged through the same rice paddies was a bit of a challenge.

I had come to the conclusion that my Vietnam experience was like a giant lake with calm waters. I could gaze out at the calm surface with a dispassionate perspective. The reflected memories dance on the surface like the clouds from the sky. All was well as long as I was looking at just the surface I could write and discuss some incidents and memories without diving in. But like most calm water, once you actually touch the surface the ripples will spread and you are no longer in control of their effect. To wade back into water that I know is too deep for you takes a full measure of courage that I am not sure I still possess. To dive in takes guts that I am almost sure I no longer possess.

So I just sit and gaze at the surface with a peaceful feeling that all will remain calm if you just don't touch or disturb the calm. That metaphor worked well for me until I saw the movie "Field of Dreams." I have since felt that the perfect metaphor for Vietnam was contained in the movie. I recommend it to you and the readers if you have not seen it. Without rehashing the plot too deeply, it involves the thin line between life and death, past and present and the confrontation of both.

The central character for me was played by James Earl Jones. Terrance Mann (who may have already been dead) is confronted with the cornfield and invited to wander back into the maze where that represents the time boundary between past and present. Within the maze is the where all the ghost still pay ball. It has the possibility of an adventure but also some danger. His statement is simple and yet profound.


Ray, there is a story out there, and if I have the courage to go through with this, what a story it will make.


As he approaches the edge of the field he cautiously reaches out to test the reality of the dream, slowly but cautiously, he embraces the challenge and finally summons the courage to just step back into the unknown. Below is the tail end of the short video showing his transition this unknown universe. To see the entire clip just reset the time line at the bottom.


I had promised myself that when the 50-year anniversary of my year in Vietnam came up in 2018, I would fly to Washington, DC. Walk up and touch the wall where the names of some past comrades are commemorated. I often used the phrase that if I had the guts and gumption to do that I could put the past to rest. That feeling and expression existed long before I ever saw the movie and has been a looming event on my horizon for 48 years now. I was always afraid that the wall would absorb me once again. Perhaps the new metaphor will be an adventure or a closure.

By the way, when my friend and his wife called from Asheville, North Carolina to say they were leaving and heading to Atlanta on October 7, 2016, I had a 'schedule conflict' and could not meet them. We talked for two hours on the phone about the old times and the old friends. I now wonder if I have the guts of Terrance Mann to reenter that metaphorical cornfield again in 2018 and perhaps touch that wall that separates me from the past that was never really past.    Here is Part II of this story.

Sometimes I doubt it.