New York Metro Area Terrorized by Bombings, Attempted Bombing: Jim Kouri | Beaufort County Now | According to former police detective Jerry McHugh, the explosives in both Chelsea and in the Seaside Park, New Jersey, bombing were set off by perpetrators using the same type of detonator.

Published: Sunday, September 18th, 2016 @ 11:34 pm
By: Jim Kouri   ( More Entries )
During a press conference on Sunday morning and Sunday afternoon, officials from the New York City Police Department confirmed that the explosion in Manhattan's Chelsea district on Saturday night - that left injured dozens of people wounded - was an improvised explosive device (IED) with components indicative of an IED later found un-detonated a few city blocks away. 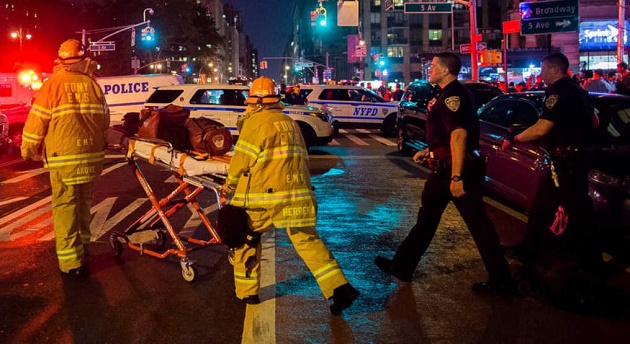 In addition, according to former police detective Jerry McHugh, the explosives in both Chelsea and in the Seaside Park, New Jersey, bombing were set off by perpetrators using the same type of detonator.

The press conference provided information to the news media about police investigators currently exploring the possibility the two explosions in Manhattan and down by the New Jersey Shore are linked to the same suspect or suspects due to the use of similar detonators While investigators in New York and New Jersey are probing the bombings and the attempted bombing separately as individual incidents, they are coordinating the results of their investigations..

NYPD Commissioner James O'Neill, who took over from retired Commissioner Bill Bratton on Friday, said federal, state and local law enforcement are working to determine the motivation of the bomber or bombers. O'Neil noted that the multi-agency effort is a highly complex post-explosion investigation. "We definitely had a bombing last night on 23rd Street and we had a suspicious device on 27th Street," O'Neill said.

He also told reporters at the press conference - along with New York Mayor Bill De Blasio - said it that state troopers are being deployed to comb the area for secondary devices.

While police officer in jurisdictions throughout the United States follow their own SOP (standard operation procedures) for arson and explosion investigations, they usually include many similarities.

Upon arriving at the scene of an explosion, investigators will immediately consult with the emergency personnel and familiarize themselves with the facts. The area will be thoroughly canvassed for witnesses. Witnesses may be found anywhere within the vicinity of the bomb blast. Once survivors are triaged and transported to a hospital, investigators will begin interviewing bomb victims.

Additional witnesses to interview will include: the first police officers at the scene; maintenance workers and other employees and residents within the premises; residents and employees of adjoining or adjacent buildings; delivery men, cab drivers, transients, and anyone who frequents or walks through the area.

Detectives and officers will also canvass the area for all license plates or motor vehicles parked within the area of the explosion. They will also check with all utility companies for any emergency crews that may have been working in the area of the bomb blast. In short, anyone who may have even the smallest piece of information will be interviewed by detectives and assisting uniformed officers. And investigating officers will double check to make sure that they have all the necessary information before concluding the neighborhood canvass. If close-circuit television cameras are installed in the areas of the attacks, the videotapes will be viewed and analyzed.

If investigators take all of the required steps and follow the aforementioned format, they will find that they are able to answer questions from their commanding officers, and in the event that arrests are made, their case folders will be helpful in the preparation of the eventual prosecution and adjudication of the bomb incident suspects.

Police sketches are usually made of the locality, the adjacent area, and the immediate bomb scene. It is not unusual for a detective to make several sketches of each location in order to portray the many details of a crime scene. A dotted line beginning at the point of entry and continuing throughout the entire scene and terminating at the point of departure may be drawn on one sketch to represent movements of a suspect. Another sketch of the same scene may be drawn to indicate the relationships existing between the various items of evidence.

The locality sketch covers the area in the neighborhood of the bombing. It may indicate the path of flight of an offender or his direction of approach to the crime scene. The area sketch is a reproduction of the immediate crime scene such as the room in which a homicide was committed, or the location of a traffic accident. This sketch shows all physical details immediately relating to the crime - evidence, point of impact and the like.

Even though a photograph makes a clear reproduction of a scene, it possesses certain limitations. The pictures, which are two-dimensional, lack depth and fail to provide an accurate representation of the distance between important items. Furthermore. the camera angle and distance from which the picture is taken may lead to false interpretations of critical relationships between objects.

The usefulness of a photograph is further limited when items can't be clearly identified, either because they blend into the background or because they are hidden by shadows. A camera will also reproduce all objects within its range. This lack of selectivity, especially in a highly cluttered crime scene, will detract from the effectiveness of a photograph. Investigators can successfully reproduce scenes by supplementing photographs with sketches. Used together, the sketch and the photos compliment one another.

In most police departments and law-enforcement agencies, crime scene sketches are divided into rough and finished drawings. Although these sketches vary greatly in appearance, they share a common denominator. Each shows the exact location of the evidence and other objects found within a crime scene

Measuring devices such as rulers, yardsticks and tape measures are often placed within the area to be photographed at a bomb scene in order to show relative size, the distance between objects, or the actual degree of enlargement. These markers are placed alongside objects so that they will easily be seen yet not obscure any part of the evidence. It is advisable to then first take photographs without markers, then to proceed to mark the crime scene as much as desired.

Markers can prove to be of significant value at a trial when the photographs are admitted in evidence. For instance, a three or six foot ruler placed alongside a hole in a roof through which entry was gained gives the viewers an indication as to the size of the opening. The photograph can be used to counter arguments that the opening was too small to allow the defendant entry into the building.

The purpose of bomb scene photography is to provide a photographic record of the facts and to allow viewers to obtain a better understanding of the crime itself: How it was committed, the setting, the manner in which particular evidence is related to the suspect or to the bombing, and other aspects of the investigation.

Photographs are taken of all evidence or conditions the investigator is trained to discover during a routine bomb/crime scene search. If a technician is used to photograph the explosion site, the detective or investigating officer should then direct the picture taking.

As many photos as possible will be taken. The more pictures that are available, the greater the likelihood that a photo may be found to contain some significant information that may have been overlooked during the crime scene search. The availability of a number of pictures also allows the detectives and the prosecutor a wider choice of selection to better present a point at issue or having the necessary qualities to complement the testimony presented to the court.

Crime scene photography involves a series of pictures taken from various points of view that usually present a general view, a medium view and close-ups. The shots should be taken at varying distances depending upon the object. The photographs are generally introduced in conjunction with crime scene sketches or scale drawings.

Two of the more common obstructions investigators encounter are: the absence of eyewitness testimony to the commission of the crime - the bomber usually uses a detonation device that allows ample time to flee the scene before detonation occurs; or his act is committed at night when the chance of being apprehended is reduced; and the explosion, collapsing walls and the general disturbance of the bomb scene by first-responders will generally obliterate or destroy most, if not all, of the criminal's traces.