WASHINGTON, NC     Gamma Beta Phi, the honor society at Beaufort County Community College, inducted new members into its organization on March 23, 2016. Erica Caracoglia, faculty advisor for the group, named the requirements and thanked the members for their hard work. She pointed out that everyone in the group has a challenge that they have had to overcome, be it a family or a full-time job, in order to continue their academic success. New inductees were presented with pins by President Courtney Coltrain and Vice-president Jacob Sadler.

Members have to be presently enrolled at BCCC and must be committed to excellence in education, to good character and to service. They must have completed 12 or more semester hours of college work and pay the one-time national membership fee of $60.00 along with local dues of $8.00 per semester. Members cannot have their grades drop below a GPA of 3.2. They cannot be absent from 2 regular meetings without justifiable excuse. 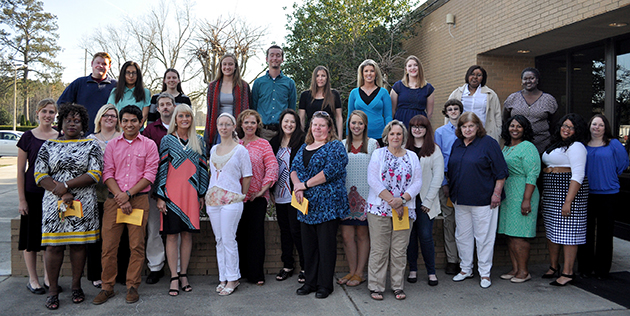 The group conducted a food drive for the Food Bank of the Albemarle last year as their service project. In the past they have raised funds for organizations like Ruth's House.