Login to Send a Private Message to Stan Deatherage
October 22nd is the ominous date when the scandal plagued, and honesty challenged former First Lady has her first appearance before the Benghazi Select Committee. Hillary B. will testify while under oath.

Publishers note: Just yesterday /today, Democrat Hillary B. Clinton is in the process of discovering that she may be accountable for her actions as, say, a Republican would be called to exist. Hillary B., former secretary of state of a disastrous administration, is finally surrendering documents - a feloniously scrubbed (data destroyed) server and a thumb-drive (data probably destroyed there too), held by her counsel, to the FBI - as per their request to discover the truth. Soon, after months of stonewalling congress and public informational requests by patriots, Ms. Benghazi may know the justice of a 'nation of laws'.

Back in early April, 2015, I wrote this piece that at some point Hillary B. Clinton, after much stonewalling again, would have the opportunity to meet the Select Committee on Benghazi - Trey Gowdy. As any hard-bound patriot, I am looking forward to this encounter to discover the truth from a woman of supreme political privilege, who may not have the truth in her. That may change.

Here we reprise that piece, where I point toward the path of this eminent confrontational collision. 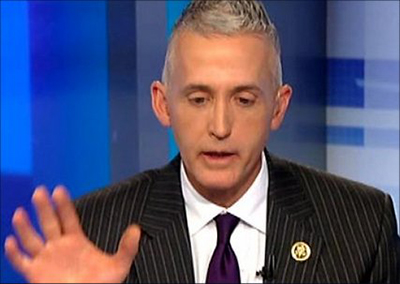 Image of Trey Gowdy from his site: Above.
Hillary B. Clinton, the curator of the Benghazi Cover-up, now must face the proverbial music that began with much talk about that 'despicable video'. The problem for the former Secretary of State Hilary B. Clinton is that it comes at the worst possible time as the newly anointed grandmother prepares to run for president of these United States.

As the custodian of the state department for the first 5 years of the Hussein Obama administration, Hillary B. Clinton presided over the worst foreign policy missteps in modern times: The Arab Spring, the Syrian 'Red line in the Sand' debacle, the completely unchecked Iranian nuclear proliferation, and, possibly, the crown jewel of all these infamous supreme misjudgments, the Benghazi Consulate Terrorist Attack, passed off as 'despicable video', and the resultant ongoing cover-up. The trouble for Hillary B. now is that none of these issues have been partially addressed by her, or the Amateur Obama administration, they will become major issues for the dilettante Madame Secretary when she runs for Commander-in-Chief, which will put her at a distinct disadvantage against any of the far greater intellectually equipped Republicans seeking their party's nomination.

Initially, at the heart of her political nightmare, is the unresolved Benghazi Cover-up, that was never vetted by an Obama Media Group's reluctance to report any news detrimental to their messiah, Barack Hussein, during the late stages of his historic (for muddle-minded Liberals) second campaign for the 'highest office in the land', so while The Amateur may continually skate away undetected because of these pathetic journalists' unambiguous sophistry, The Benghazi Curator, Hillary B. Clinton, will not be so lucky.

Two profound reasons exist to stop the Democrat candidate, of all 'low information' women and Liberals of America: 1) South Carolina congressman, Trey Gowdy R., bulldog Chairman of the Benghazi Select Committee 'is on the mother%&F@#&', just like 'The Wolf', and he will not let go of this political bone until he has put the issue to full rest, come Hell or the gross stupidity of sophistic journalists; 2) Hillary B. Clinton will not be afforded the investigation embargo that was so joyfully accorded to Barack Hussein Obama.

Currently, Chairman Gowdy has requested from Ms. Clinton's high-powered-attorney-on-retainer David E. Kendall, all of Clinton's state department documents to end the obstruction of justice patently practiced by Ms. Clinton, and the entire Barack Hussein Administration, for that matter, of which that time period has been extended to March 27, 2015 from March 13. Also within this legal correspondence compelling the truth from Ms. Clinton is that her infamous server, where she co-mingled state department e-mails with her own, be turned over to a third party for a forensic analysis to test the Presidential Candidate's veracity, which, as a Clinton, has often been in question. Ms. Clinton will have until April 3, 2015 to produce the infamous server to the Inspector General of the GAO (General Accounting Office), and should she not relinquish that very server, a subpoena for such will be forthcoming. This will spark a massive legal battle just as she prepares to seek to be the first woman president of these states united. 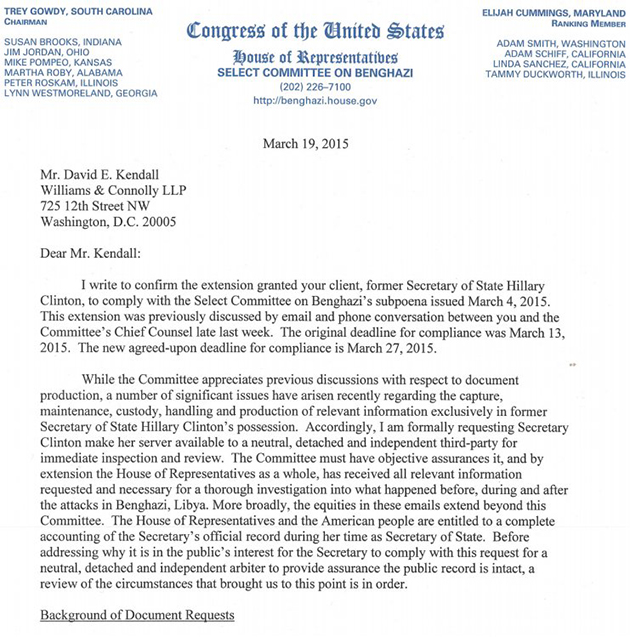 The unremarkable possibility to Hillary's plight could be that those very same unprincipled journalists who conspired to protect the Community Organizer-in-Chief may not rush to defend Ms. Benghazi as some of the OMG may rush to regain some small measure of dignity lost, and remarkably some liberal journalists are just not as mesmerized by Ms. Clinton as they are of America's first 1/2 Black president. Regardless, I believe the Benghazi affair will be Hillary B. Clinton's 'political Waterloo', as this shallow 'woman' faces the depth of an inquiry that is far more serious than middling-minded liberals could ever fathom. Nightmares come real and this will be far more serious an exercise than Ms. Hillary is ready to endure. Announcing: "Was it because of a protest, or was it because of guys out for a walk one night who decided they'd go kill some Americans? What difference, at this point, does it make?" will not make all of this just go away.


poll#71
In light of former Secretary of State Hillary B. Clinton admitting that she co-mingled state department business, in her private e-mails, with her personal business: Should Hillary Clinton be forced to relinquish her private server, where e-mails were stored, and, ultimately, transmitted?
1.8%   It is Hillary's e-mails, it is Hillary's private server. Leave her alone.
97.01%   Hillary lost any sense of privacy when she co-mingled the People's business with her own.
1.2%   If it is not Facebook, I don't care.
167 total vote(s)     Voting has Ended!