Researchers are collecting baseline data on alcohol use, risky health behaviors and levels of intoxication from volunteer patrons of drinking establishments in downtown Greenville. Last year, more than 800 people took the survey. This fall, another 800 have been collected.

"We are not trying to eliminate the consumption of alcohol among individuals who are of (legal) age," said Dr. Beth Chaney, assistant professor in the Department of Health Education and Promotion in the College of Health and Human Performance. "We're trying to provide a safer environment for those individuals, and to ultimately reduce the frequency of hazardous drinking behaviors that can result in an array of negative consequences."

Chaney recently was appointed to the North Carolina Substance Abuse and Underage Drinking Prevention and Treatment Task Force. While the statewide task force is just getting started, Chaney plans to contribute findings from ECU's study. 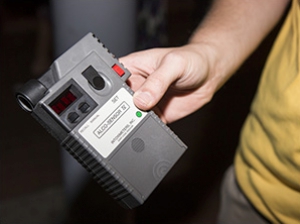 An Alco-sensor device is used to measure breath alcohol concentration.
"I feel some of our research protocols would be helpful to other institutions in our state," Chaney said, adding that, in general, college students are at-risk for hazardous drinking behaviors, which extends beyond ECU.

Chaney is one of 20 members charged with preparing a comprehensive plan to address the underage sale and use of alcohol and drugs, risky behaviors and substance abuse among collegians, and treatment and recovery services for individuals struggling with substance abuse.

The governor signed the executive order creating the multi-agency task force at ECU in May. ECU is one of six University of North Carolina campuses that will take part in a pilot program emphasizing prevention and treatment.

More than 40 undergraduate and graduate students in health education and promotion have been trained to conduct interviews. "It's a unique opportunity for them to better understand the research process, how and why the protocol was developed and to gain an understanding of social and behavioral science," Chaney said. "They get to be an investigator on the study. It's something they can put on their resume." 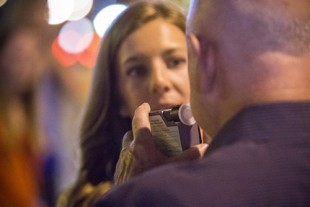 Student researcher Kerry Brechbiel learns how to operate the equipment she will use to gather data on alcohol usage.
The student researchers - dispersed downtown in groups of three to six - ask about 15 questions and record a breath alcohol concentration or BrAC. Participants - who are completely anonymous - learn their level of intoxication, and get free pizza and soda for taking the survey.

"A lot of times they will say 'I feel fine; I can't believe I'm in the danger range,' " Chaney said.

A stoplight graphic, highlighted in red, yellow and green, is used to show participants which zone they're in based on their BrAC results: danger is .08 and above; caution is .02-.07, and safer is less than .02.

"We're very clear that if you've consumed alcohol in the past 10 minutes that what your range reads now could be very different in 30 minutes because the alcohol hasn't entered your blood stream," Chaney said. "If you're in a caution range now, you could be in danger in 30 minutes."

Participants are asked how often they get drunk and the number of drinks they've had in one day to their plans for getting home that night. It's the first alcohol field study conducted at ECU, Chaney said. Other research team members include Dr. Jennifer Matthews, Dr. Ryan Martin and Karen Vail-Smith, all faculty members in the Department of Health Education and Promotion.

"Conducting the research allows us to better understand alcohol usage in downtown Greenville," said Matthews, associate professor of health education and promotion whose research has centered on substance use among college students, alcohol policies on campuses and patterns and contexts of adolescent alcohol use. "The data can be used to inform bars and restaurants, city officials, ECU administrators and the community at-large about alcohol-related behaviors. Hopefully, the data can be used to develop a community-wide approach to preventing negative alcohol-related consequences."

It's the Friday night before the Pirates take on the University of North Carolina Tar Heels in Dowdy-Ficklen Stadium, and downtown streets are full of fans lined up to get into clubs and restaurants.

As they wait, student researcher Lani Espinosa-Blanco, a junior public health major from Vanceboro, asks people to take the survey. She's easily spotted in a bright yellow T-shirt that each ECU researcher wears.

Some people ask: Are you a teacher? Do you work for ALE (Alcohol Law Enforcement)? What is it for?

"We see some people who have a plan for (getting home) when they go out, and others don't," Espinosa-Blanco said. 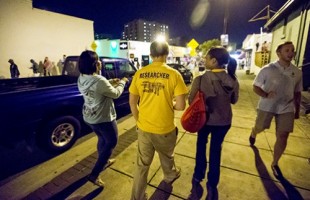 Student researchers arrive in the downtown Greenville area to seek volunteers who will participate in the data collection.
One survey participant, a 19-year-old ECU student, said it was her first time taking a breathalyzer test. She registered in the safe range because she had not been drinking alcohol. "It was for the good of research," she said. "Hopefully it (the results) will make people more aware."

Researchers are assessing high-risk and hazardous drinking behaviors during the first weeks of fall semester, querying the night before two home football games and two away games for comparison. Those surveyed include ECU students, non-students and students from other universities or colleges.

One behavior seen is "drunkorexia," a form of disordered eating that can include not eating all day or eating very little to offset calories consumed from alcohol. Disordered eating is different than a diagnosed eating disorder such as bulimia or anorexia, Chaney said.

"An example of drunkorexia behavior is when an individual will limit their calorie consumption to feel the effects of alcohol quicker," Chaney said.

In addition to questions about drinking, participants are asked about the frequency of alcohol-related injuries and intentions to engage in risky sexual activity.


'Get a better understanding'

Student researchers will return downtown in fall 2015. Afterwards "we plan to aggregate or compile the three-year data," said Chaney. "Once we do, we will have a better understanding of the behaviors and will work to establish collaborations in the community to collectively address the issues associated with hazardous drinking behaviors."

Jeff Brooks, owner of the Varsity Club on 5th Street, supports the study and ECU, which has purchased pizza from the restaurant to give to survey-takers.

"I hope this study will add further research and data to the conversation and that it will reduce the dangerous consequences that unfortunately come with excessive alcohol use," Brooks said.

Having local business support is important, Chaney said. "Obviously we're not there to cause issues for any of the establishments, but to get a better understanding of the alcohol-related behaviors that are occurring in our community," she said. "We've had quite a bit of support and I've not heard of any opposition regarding the study."

An article based on last year's data has been accepted for publication by the Journal of Substance Abuse. ECU researchers presented the study this month at the American Public Health Association Conference in New Orleans, Chaney said. 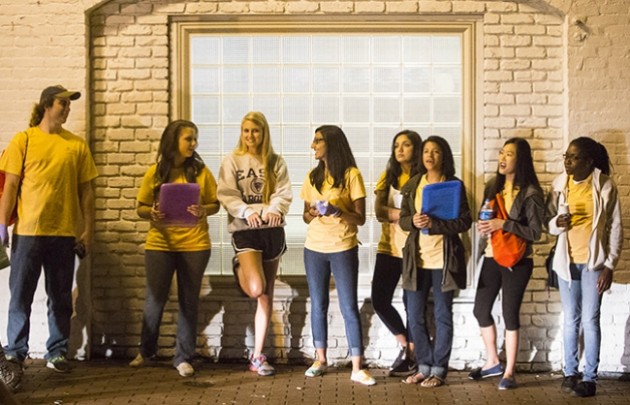 ECU students Macie Whitlow and Garrett VanHoy are among a group of student researchers assisting health and human performance professor Beth Chaney in her research on alcohol consumption and hazardous drinking behaviors. (Photos by Cliff Hollis)