Consensus denial persists, according to Paul Krugman (to cite one who is highly experienced in denial), because "there are powerful groups with a strong interest in rejecting the facts." John Locke Foundation,Jon Sanders,Rail,Consensus,Wake County,Residents,transportation,Transit
Home
Categories
Login

Consensus denial persists, according to Paul Krugman (to cite one who is highly experienced in denial), because "there are powerful groups with a strong interest in rejecting the facts."

The consensus that this powerful group would deny is one The News & Observer has been denying for years, while angrily insulting those who didn't join in. They dismiss the consensus by calling it "the same tired reason." As in: "Gee, it looks like it would be fun to jump off this cliff and glide safely to the bottom." "Don't do that, you'll plummet to your death!" "Oh, silly, that's the same tired reason people always give me. Fun wins this time, Geronimo-o-o!"

So what is this tired old consensus? Here:


The Triangle area, including Wake County, is too decentralized, too spread out, and not nearly population-dense enough to support expensive light rail.

In the space of two years, Wake County commissioners and local media cliff-divers heard that message from not one, not two, not even five, but six different transportation experts. They included light-rail advocates:


As stated before in this newsletter:


That's formidable consensus. It's not something any responsible civic leader should ignore.

Especially not leaders in this highly decentralized, highly spread out area, where so very few of the population opt for any kind of public transit (see Raleigh third from the bottom; that's right, we are making Birmingham eat our transit dust!): 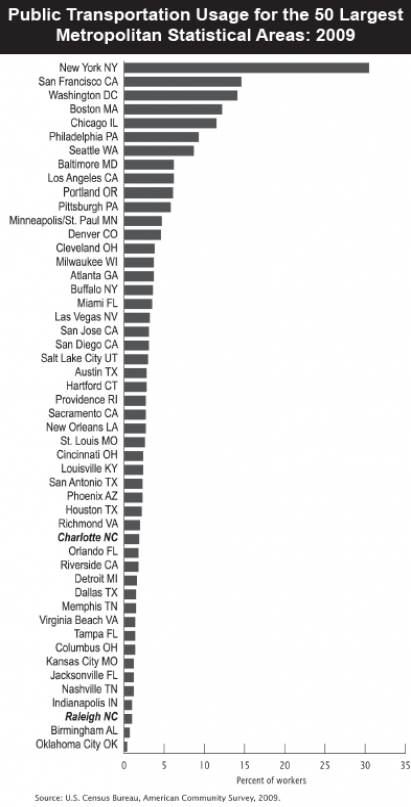 Responsibility isn't fun, however. What is fun is to envision all the civic magic that light rail will supposedly bestow. The illusion and the new tax revenues it will require give the politically powerful ample reasons to reject the facts.

Nevertheless, in the words of transportation expert Randal O'Toole,


light rail is an obsolete form of transportation that does not promote economic development, relieve congestion, save energy, or reduce air pollution. All it does is cost lots of money.

It is to be hoped that the new commission doesn't decide that irresponsibility wins this time. Rail consensus denial is not worth this leap of folly.