In Concert: Riders in the Sky

Login to Send a Private Message to Wyatt Sanderman Day
In the Holiday Spirit the Cowboy Way ...

The worn wooden stage at the head of the Turnage Theater was aglitter and aglow with the bright, but tacky Christmas lights adorning some of the many stage props of the night’s entertainment, Riders in the Sky. The fabricated cactus that stood behind Joey the Cowpolka King and Too Slim was strung with the glittering lights, the synthesized campfire glow had its place in front of the singing foursome, with a large Woody action figure (from the Disney animated film Toy Story) aglow in the synthetic light of the fabricated campfire, and stage right, there was the boney skull of a steer atop a box named Too Jaws. 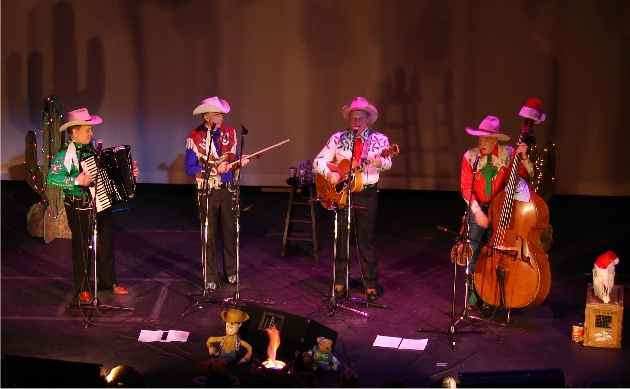 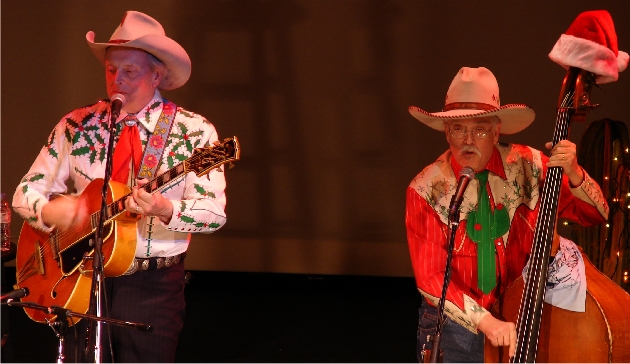 The band members were decked in their finest holiday attire; even Too Slim's standup bass had a Santa's cap atop its tuning fret. And that was their mission that night - To bring Christmas to the people of eastern North Carolina - "The Cowboy Way." Ranger Doug, from behind his Stromberg Jazz Guitar, bantered, "We've played over 5000 live performances, played the Grand Ole Opry nearly 700 times, won two Grammys, and we even had Saturday morning TV show, and now, at the apex of our illustrious careers, and we have finally made it to the top - we get to play the Turnage for all you fine folks. Now, we may could have made it here sooner, and to accomplish this, there may have been a easier way. But it wouldn't have been the cowboy way." 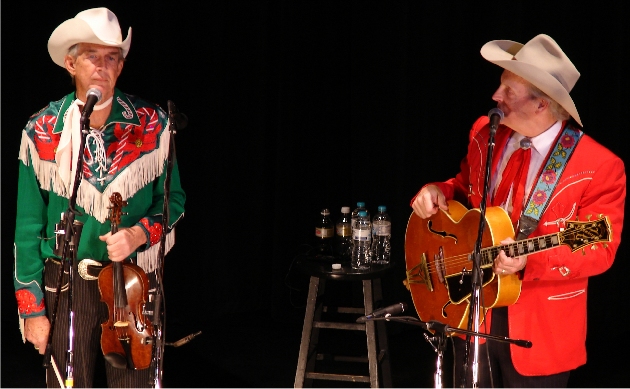 Ranger Doug explaining to Woody Paul and we, the audience, what it means to live life The Cowboy Way: Above. One of the last of the great singing cowboys - Woody Paul: Below.     photos by Stan Deatherage 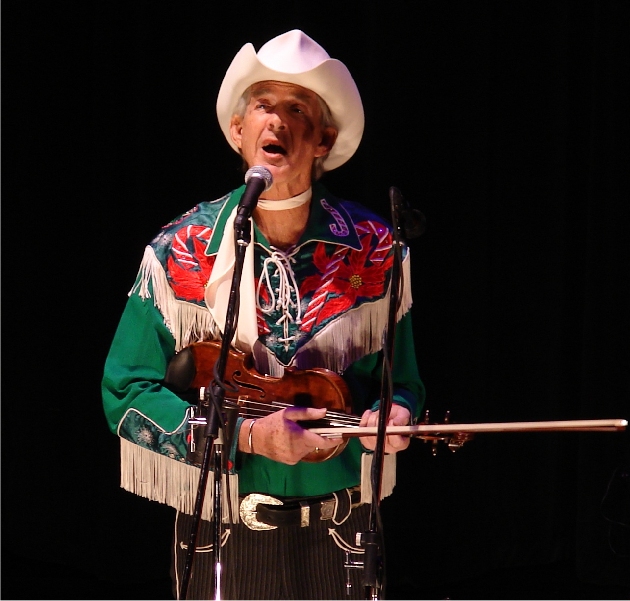 And that was the show that night. Ranger Doug (Douglas Green), Woody Paul (Woodrow Paul Chrisman), Too Slim (Fred LaBour) and Joey the Cowpolka King (Joey Miskulin): "Bringing Good Beef to Hungry People!" And the beef, in fine form of some very good authentic cowboy music, was very good.

The "Good Beef" as the allegorical reference for the well conceived, structured and harmonized cowboy music of these musical sages of the deserts and plains of the old west was food for my hungry ears and spirit. Riders in the Sky is the only authentic cowboy band still performing the music of Gene Autry, Roy Rogers and his former singing group The Sons of the Pioneers. These performers of stage and screen created a romantic, unrealistic portrayal of the hardworking, cow-punching buckaroos that portrayed these steer-droving men of the west as well dress cowboys, quick with a gun (but never actually killed anybody), and quicker with a song. 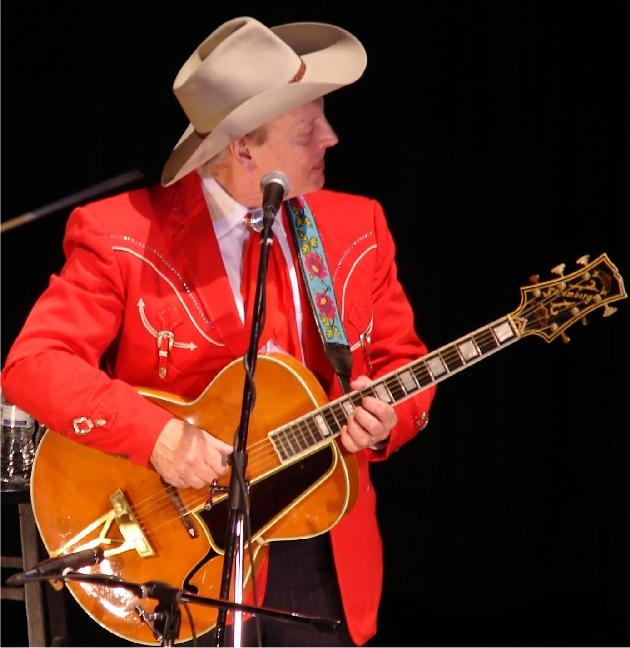 Ranger Doug was the focal point of the original trio that consisted of him, Woody Paul and Too Slim. When the Trio originated some 32 years during the not-so-heady days of Disco, they were a welcome relief from some of the worst music of century. I've been a fan of these singing cowboys since their inception: Above. Ranger Doug and Too Slim, who is not too slim anymore, has a serviceable tenor voice and pulls his weight during the all harmonies: Below.     photos by Stan Deatherage 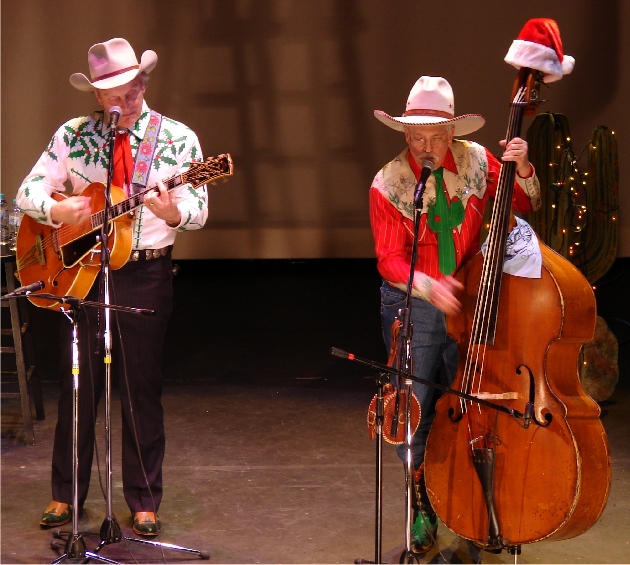 The real cow-punchers were actually very different due to the demands of the dusty, muddy cattle trails, whereby the bulky beef was herded to the various Kansas railheads to ship these hoofed creatures back east to feed hungry American citizens. The real cowpokes were, however, quick with a song, but not to entertain each other so much, but to sooth the ever nervous herd.

The Riders in the Sky are not those types of cowboys, but more like the Roy and Gene; high dressing dudes, who more familiar with a musical instrument than shooting up a saloon / brothel. This Thursday night, December 10, 2009, these manicured cowboys brought to the large crowd of fans at the Turnage Theater some fine classic melodies of that romanticized vision of that classic cowboy. It certainly worked for me. 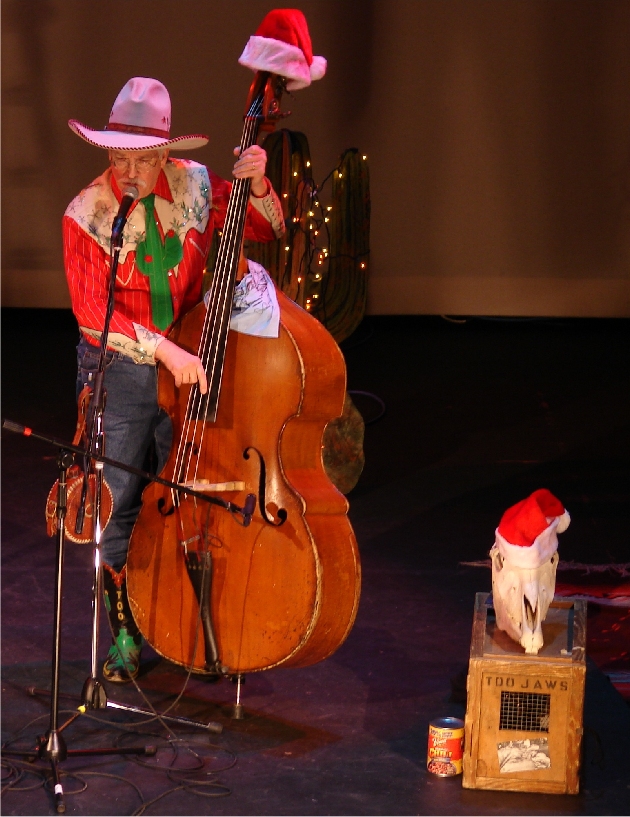 Too Slim singing about life from "behind the herd;" Too Jaws keeping him company: Above. Joey the Cowpolka King and Woody Paul keep the tempo moving along, while Ranger Doug and Too Slim keep the rhythm of group well paced: Below.     photos by Stan Deatherage 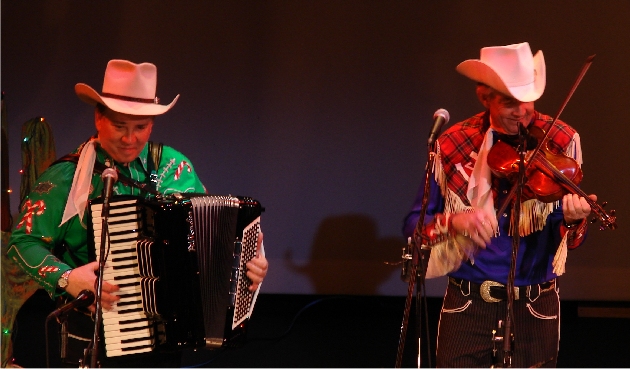