Forrest Gump | Beaufort County Now | "Forrest Gump" is one of the five best films ever made. It is the best of American art ... in scope, in tone, in message.

Login to Send a Private Message to Wyatt Sanderman Day
Forrest was named for a distant relative, Alabama's most celebrated Confederate General, Nathan Bedford Forrest. Forrest's IQ was just a beard hair less than 80, which is central to the theme of this film on many levels: Forrest's overarching innocence, his ability to accept and understand simple premises, his unbridled wonder-lust and his complete inability to say no, and all the predicaments it got him into.

Forrest Gump was played by Tom Hanks, which was his greatest achievement as an actor, and less face it, from "Philadelphia" to "Saving Private Ryan", Tom Hanks one of the most exceptional runs of any actor ever. In fact, Tom Hank's Forrest is one of the greatest, and there is just a handful of others equal to this, jobs of fleshing out a character in the over 100 years of all cinema. He understood the sweet essence of Forrest, and completely projected that transcendental cadre of perfect values to their essential core.

From the perfect philosophy of singleness of purpose, Tom Hank's Forrest was able to transcend his handicap and have an innocent and perfect relationship people and the resulting situations. From an almost idiot-savant perspective of purpose the mentally handicapped Forrest was able to become immersed in fractured, frozen moments in time that was most comical, as exhibited by his unusual relationship with his gruff drill instructor in basic training.

And there was this second interaction of Forest with his D.I.

Forrest Gump: "DONE, DRILL SERGEANT!"
Drill Sergeant: "GUUUUUUMP! Why did you put that weapon together so quickly, Gump?"
Forrest Gump: [confused] "You told me to, Drill Sergeant?"
Drill Sergeant: "Jesus H. Christ!" [looks at stopwatch]
Drill Sergeant: "This is a new company record! If it wouldn't be such a waste of a damn-fine enlisted man I'd recommend you for OCS! You are gonna be a general someday, Gump, now disassemble your weapon and continue!"

There is no doubt that there is nothing resembling Norman Rockwell's masterful illustrations in this frank and funny exchange between Forrest and the Drill Sergeant; however, it was the intent of the Director to story board a number of scenes that resemble the spirit of Rockwell's vintage Americana. This subtle measure, along with the aforementioned South, employed to near allegorical status, were used to keep the film socially centered, so that broader messages could be explored. 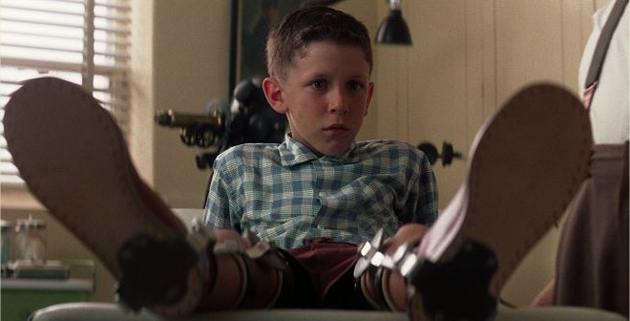 The early scenes in the Forrest Gump story most resemble the soft tones, in color and mood, of Norman Rockwell's America. Michael Conner Humphreys, as Young Forrest, well sets the mood for the mentally challenged boy. This was the young actor's first brush with working in front of the camera, and remarkably, Tom Hanks patterned his verbal cadence, as Forrest, after the manner of speech that the young actor used to speak his lines as Young Forest.


Chief among them is the immutable fact that life is difficult at best, but somehow the sour of adversity somehow sweetens the reward of perseverance.

Forrest overcame much adversity through the strong family unit offered by his single mother, played by Sally Field, who truly brought a tough sweetness to the role of the indomitable mother. She protected her young cub, like a 5'2" Lioness, and as incredulous as some may feel about this simple explanation, she instilled within her loving son all he needed to truly make his way through the rugged world of that was 1950's / 60's southern America.

Tom Hanks, as the uncommonly wise Forrest, narrated his story throughout the entire film, but only to accentuate the tale of his remarkable life, not reveal every nuance of his existence. Forrest often referred to his mother during that narration, and predominately summed up his mother's profound influence, by this one line of narration:

Forrest Gump: "Mama always had a way of explaining things so I could understand them."

Forrest / Hanks narrated that he and Jenny were like "Me and Jenny goes together like peas and carrots." Sadly for Jenny, she lived life hard and fast, and paid the costly price. Regardless, her pain was the foil to paint the bittersweet picture of the poignant life lived and understood.

Forrest was known around Greenbow, Al. as "that running fool." After his crooked legs healed from the continuous wearing of corrective braces, his legs were strong and fast and University of Alabama Coach Paul "Bear" Bryant found a place on his team for the fleet footed Forrest. After Ginny's troubled childhood, with an abusive father (possibly incest), she just needed to fly away:

[young Jenny's father is chasing her through the fields to beat her when she stops and hides]
Young Jenny Curran: "Dear God, make me a bird. So I could fly far. Far far away from here."

Ginny and Forrest both found life more complex after graduating high school. Remarkably, Forrest found an easier time of it.

After their college years, Forrest joined the US Army and Ginny hitch hiked to San Francisco to explore the Haight Ashbury perspective. Forrest survived Vietnam and Ginny survived the counter culture movement, but barely. 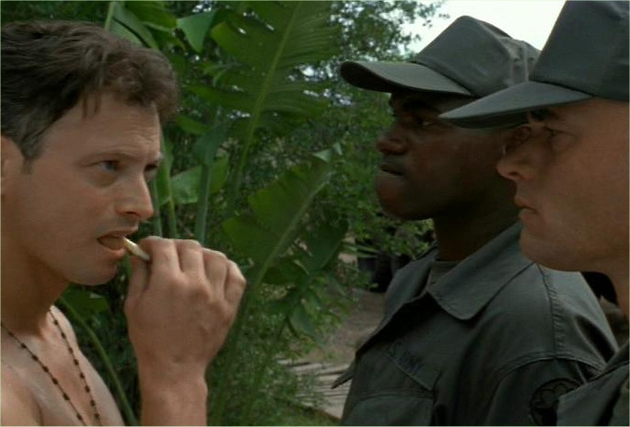 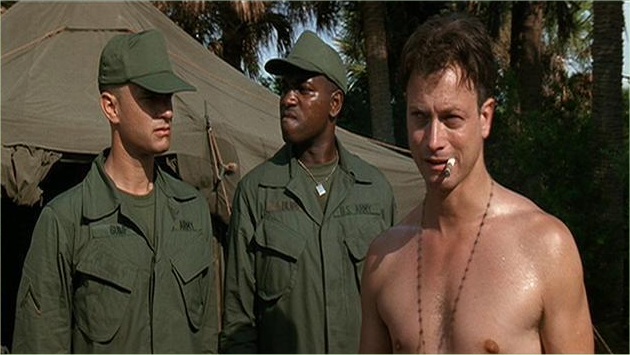 Every time I view "Forrest Gump," I particularly enjoy the machinations of Ginny / activist Hippies meets Medal of Honor recipient Forrest Gump. There are a few sparks and the sweet simple-minded Forrest doesn't know why. He just knows that something is instinctively wrong, and I dig that. Maybe these few quotes and pictures will help me explain what I mean, and don't think I need to explain who Abbie Hoffman, of "Steal this Book" fame, was. Look it up. It's worth it. 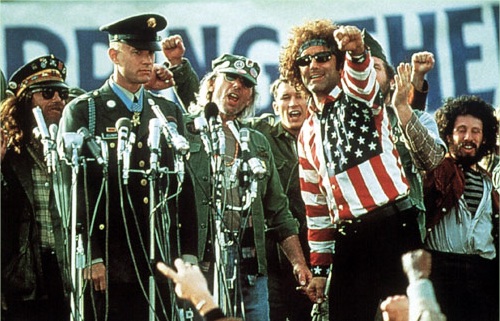 Forrest Gump: "My name is Forrest. Forrest Gump."
Abbie Hoffman: "Forrest Gump." Crowd: "Gump!"
Jenny Curran: [shouting] "Forrest! Forrest!"
Forrest Gump: "Jenny!"
[Forrest sees Jenny in the crowd and jumps into the crowd to run towards her. They both run through the water in the reflection pool. The crowd cheers once they embrace]
Go Back