Birmingham Children’s Theatre Troupe Brings Zorro to Washington | Eastern North Carolina Now | Zorro, a fun and fast paced production perfect for children 6 and up will be performed at the Turnage Theater on Saturday, November 13th at 2pm by the Birmingham Children's Theatre troupe.

Login to Send a Private Message to Stan Deatherage
For Immediate Release:

Zorro, a fun and fast paced production perfect for children 6 and up will be performed at the Turnage Theater on Saturday, November 13th at 2pm by the Birmingham Children's Theatre troupe.

This production is a stage adaptation of Johnston McCulley serial "The Curse of Capistrano" directed by Abe Reybold, with 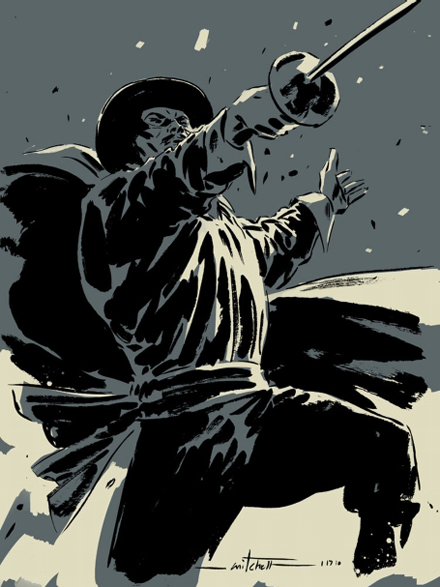 Johnston McCulley, born in 1883, loved to write, and so became a reporter for The Police Gazette, taking time off during World War I to serve as a Public Affairs officer. After the war, he returned to writing, gaining notoriety for his first Zorro story in 1919. The public asked for more, and McCulley ended up writing 77 Zorro stories for magazine issues. In addition to Zorro stories and novels, McCulley wrote more than 100 Western stories and twenty mystery novels, under pen names like Raley Brien, George Drayne, Grant McAlpine, Frederick Phelps, Rowena Raley and Harrington Strong.

In "The Curse of Capistrano", the Spanish soldiers are on the hunt for the trouble making bandit, Zorro. In the course of the action Zorro is wounded, and Don Diego de la Vega, a young nobleman, arrives wounded at the house of the Romeros - home to his childhood playmate, Rosa. His arrival brings suspicion on the Romeros and a visit from the cruelest of Spanish soldiers, Colonel Corti. Corti and Zorro fight, and the outcome must be seen to be believed!

The Birmingham Children's Theatre is the resident professional theatre company at the Birmingham-Jefferson Convention Complex in Birmingham, Alabama. Founded in 1947, BCT is one of the nation's oldest continuously run children's theatre companies. They have over six decades of experience making a positive difference in the lives of over twelve million of our children. The Turnage Theater is proud to bring this production to Washington, NC, on Saturday, November 13th at 2pm for only $12 per adult, and $5 per child up to 12. Tickets are available now at the box office located at 150 West Main St. in Washington, over the phone at (252) 975-1191, or on line at turnagetheater.com.