Login to Send a Private Message to Hood Richardson
A new tool to help the big boys avoid paying taxes on personal property has been approved by this short session of the legislature. It started with the sudden introduction of House Bill 462 titled "Contingency Audits/Assessments". This bill was brought into the legislature on short notice with limited debate. These are the clues that a bill has powerful interests behind it. The North Carolina Association of County Commissioners reports: "The bill is being pushed by a strong coalition of business interests, including retail merchants, telecommunications and the N ,C. Chamber (of Commerce)". As a small business man I know how much of a pain it is to hand the tax collector another schedule of personal property to be taxed.. I and all business people are required by law to list personal property taxes during January of each year. Why cannot the assessor find it himself? He finds all of my real estate and sends me a tax bill.

What is personal property? In general the State defines it as anything of value that is not real property or intangible property. Intangible property is stocks, bonds, savings accounts, etc. North Carolina no longer taxes intangible property. So, in general, personal property includes bull doziers, plows, cows, goats, stored grain, combines, lathes, dress racks, business inventory of supplies, anything for sale at retail, tools, and everything else. Because North Carolina no longer taxes household goods, we are talking about non real estate property that is used in business. For example all the equipment that goes into farming, manufacturing anything, cars, furniture, parts etc.

The finding and cataloging of personal property is a complex issue. Taxing authorities got out of the business of trying to inventory the personal property for households many years ago. I can recall my father listing personal property during January of each year. In those days there were taxes for each gun, dog, cow, and house hold articles. Automobiles, mobile homes, airplanes and boat taxes are now listed from the state record of title. Most other things do not have a public record of title.

What about small businesses and big businesses? Some people make a good living working from home or a small shop. Then there are the big companies who operate over several states and hundreds of counties. Their ownership can be Corporate, subsidiary, LLC, partnership, or even individual. Every business entity is required to list taxes during the month of January of each year. The basic question being asked by the Tax Assessor is "What did you sell or discard, and what did you buy or lease during the past year"? This sounds really simple and easy. A very small business man can answer off the top of his head. But, a business of any size will have to think about it and compile a list. 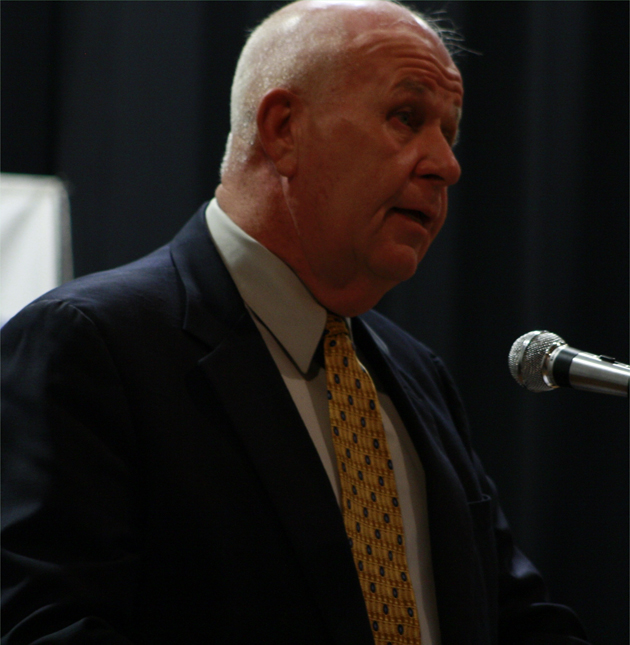 Beaufort County Commissioner Hood Richardson, showing up, and telling his story on his county can be better governed: Above.     photo by Stan Deatherage

The problem with listing personal property taxes is that it is the honor system and there are significant amounts of money involved. Say someone forgets that he purchased a half million dollar machine last year. At a tax rate of 60 cents per 100 dollars of valuation that is $3,000.00 in property taxes. Failure to collect this tax passes the burden to everyone in that county who is paying taxes. The North Carolina Association of County Commissioners reported there were three billion dollars in personal property taxes discovered as not reported to the tax collector last year. At the 60 cent rate that is eighteen million dollars. That amount of money is getting close to what many of the 100 counties in North Carolina collect in one year for all property taxes.

Counties make photographs from the air to make sure all real estate is taxed. We rely on the State system of titles for automobiles, airplanes, and mobile homes to insure compliance with tax listings. Personal property can and is moved from building to building, farm to farm. There are very few tracking records. The workings of commerce are too complex to have a universal system to keep track of personal property. Even if some state or county tried, my opinion is there would be a severe invasion of the right to privacy guaranteed by the Constitution.

The present listing system mixes money with honor. Not all people are dishonest but, there are enough to have three billion dollars of unlisted personal property in one year. So, how do we know the amount was three billion dollars? Because that is the amount that was discovered by those who track down unlisted property. There is even more property that was not discovered.

The bill (H462) caused considerable excitement among county commissioners and tax collectors across North Carolina. They saw taxes going up for the average tax payer because a lot of personal property would not be listed. The proposed bill made it illegal to use the most efficient and best method presently being used to discover unlisted personal property. That method is called the "Contingency Audit". Basically the finder of the unlisted property gets a one time payment of a percentage (about 35 percent) of the unlisted personal property tax. The finder must be under contract with the County. The County pays no fees until unlisted taxes are discovered.. Some call it tax bounty hunting.

This is a highly efficient method with no risk to the tax payers or the county. One company, and there are at least three in North Carolina, serves multiple counties. These companies provide other services and do not rely exclusively on tax bounty hunting to make a living. Not even the largest county in North Carolina can afford the skilled staff and computer equipment to serve its self and collect enough unlisted taxes to break even. Having to send tax auditors to other states or even counties to make a case would be cost prohibitive. Counties providing this service to themselves open the door to being accused of conducting oppressive and heavy handed tax audits. Counties that could not afford the computer screening equipment could show up on your door step and demand to see all of your personal business property. Without the contingency audit there will be more opportunity for special interests to not get appropriate audits while those out of favor can easily be abused.

After a fierce lobbying effort by the Counties, a poor compromise was reached. The Counties may continue to use outside contractors to search for unlisted personal property for one year. They may not use contractors who are paid a fee based on unlisted taxes discovered for the following two years from July 1, 2013 until June 30, 2015 while the Legislature's Revenue Laws Study Committee examines the issue. I have an idea a lot of people are going to slack off on listing personal property during that two years. There are fines and penalties for not listing. Whatever replaces this excellent system will probably be more burdensome to those who list and to County tax collectors than the present system. Because the present system works so well the Association of County Commissioners will fight hard to keep it.
Go Back