General Stanley McChrystal Fired by President Obama | Beaufort County Now | General Stanley McCrystal has been relieved of his duties as the General-in-charge in Afghanistan. He will be replaced by Four Star General David Patraeus.

Login to Send a Private Message to Stan Deatherage
General Stanley McChrystal has been relieved of his duties as the General-in-charge in Afghanistan. He will be replaced by Four Star General David Patraeus. 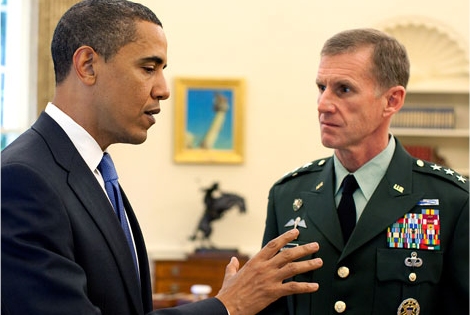 timing of implementing the Afghanistan version of the Iraq surge that drove the radical Islamic insurgents and terrorists underground or out of Iraq. On this occasion, the General was recalled to Washington, D.C., and summarily fired by the President in a short 30 minute meeting over comments made by him and anonymous members of his staff in a Rolling Stone article that were considered disrespectful to the Obama National Security team.

Otherwise, it is well reported, the quality of General McCrystal’s work as a soldier is beyond rebuke. The Three Star General was General Patraeus’s right-hand man in the Iraq surge that was so successful in eradicating the radical Islamic Extremists from the Iraqi scene. In that operation, General McChrystal was responsible for the special operations efforts that were so successful in providing intelligence and the fierce fighting force that is the U.S. Army Delta Force, Green Berets, and the Rangers. The General, who has spent the last 8 years in a constant state of battle for his country, was highly respected by his men, and without peer in terms of dedication.

Fox News Correspondent Geraldo Rivera, who knows the General, conceded that the hard working, hard charging general was at fault, but commented, “the General’s resignation should have been refused by the President.” He concluded that a man of McChrystal’s quality is two valuable of a resource in our efforts to win in Afghanistan and that the Rolling Stone should be ashamed of their incendiary journal that was mostly taken from comments made anonymously and off the record.
Go Back