The bluegrass / traditional country band Bearfoot came to Washington’s Turnage Theater and gave a near perfect performance of the music that steels my will to consider the talent that could stir my soul. And what a resounding success it was?

Bearfoot is a group of five young folks, ranging in ages of 22 to 26 years of age, who have grown preciously wise in their approach to an American genre of music that is becoming some of the best music made today. Their music is born from the traditional tunes of Americana and the hybrid of the ancient folk blend that is the American bluegrass music, born right here in the southern Appalachian Mountains. 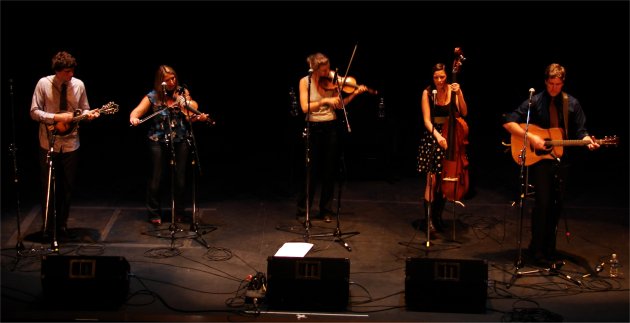 When I met the individual members of the band after the show, I mentioned that fact, and the roots of bluegrass of how the Scotch and the Irish in America would move down the Appalachian Mountains to keep their distance from the English. I continued to inform them that as the English found a home in the lower mountains and valleys of Pennsylvania and Virginia, the Scotch and the Irish came to find a permanent home in the much higher and inaccessible mountains of North Carolina and Tennessee. Their seclusion from the English and others 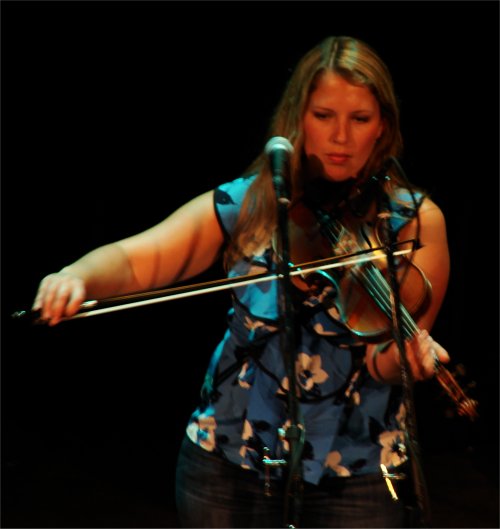 allowed them the responsibility to form clans, and entertain themselves and children the only they knew how: By playing the folk music of their respective homelands, and telling the stories of their rich history and of their ongoing lives. Eventually this evolved into “bluegrass music” or “mountain music” and later as “old-time music” as it was formerly known.

Angela Oudean, the lead fiddle player and one of two members of the band from Alaska, remarked that she thought, “that bluegrass music was from Kentucky;” at which I informed her that no, Kentucky is know as the “Bluegrass State.”

And then I informed her of what traditional music regional icon Mike Cross once told me, “Wyatt, The best traditional bluegrass musicians that ever lived are within an 150 mile radius of Wilkes County (North Carolina).”

I believe she understood me for she remarked, “Like the movie ‘Songcatcher’” (film about the some the earliest recordings of the “mountain music” southern Appalachia).

Remarkable; I thought that someone, who is so proficient at understanding this form of music, in the way she expertly plays it, does not truly understand its origins. And then I remembered: This is the really great aspect of youth. They, occasionally, achieve great things, without being aware of all the intricate histories as to the origin of their craft. In essence, they create rather than comment.

To this extent, the young women and men of Bearfoot, especially at their tender ages, are without peer. They are a fluid band of strings and voices that call out and blend into one of the tightest sounds I have had the pleasure of witnessing in some time. The young musicians are particularly adept at producing a subtle sound with their string instruments and voices, while harmonizing these sounds at the proper time and in the perfect sequence of notes for maximum effect of tone.

Couple that relaxed sound, which seems to state - you know we’re holding something back here - with some very well crafted songs in melody, lyrics and originality, and we have a fine collection of talent that has plenty of room to run. Their new CD, “Doors and Windows,” is a collection of 11 tunes: three are written by band newcomer (in 2008) Odessa Jorgensen, who separately wrote three, including the titular tract; one song, “Caroline,” was written by former band mate Annalisa Tornfelt and another, “Good in the Kitchen,” she wrote with entire band, Jorgensen and Oudean penned “Time is no Medicine,” one tune, Single Girl, is a traditional and arranged by the band and the rest of the songs on the CD were written by other musicians, including “Don’t Let Me Down” by John Lennon and Paul McCartney. 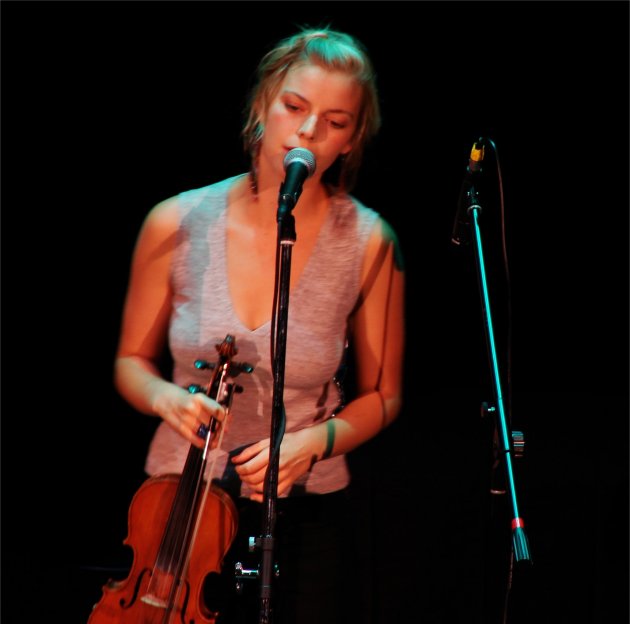 Odessa Jorgensen will pull down her fiddle and softly, but with great conviction, sing the gentle notes that convey the soul of her songs: Above.     photos by Stan Deatherage


I call attention to this song that was written long before any of these musicians were born to draw attention to the versatility of this young ensemble. Here they were performing a tune by two of the greatest songwriters in the last 100 years, changing the arrangement to a more jazzy / smoky blues version, with those great bluegrass instruments - mandolin and the long strokes upon the fiddle - and they nailed it. Similar to another great bluegrass band, Allison Krause and Union Station, who took a great Beatles' song, "I Will," and similarly as Union Station did with "I Will," they hit the proverbial home run.

And that is one of the great strengths of Bearfoot: They are not afraid to take chances in their low-key approach to an intense genre of music - bluegrass. Their perfect harmonies, with most of the lead vocals sung by Odessa, and to lesser extent Kate Hamre, in voice complements their instrumentation of all those wonderful strings that one can well understand their confidence to take a delicate bite out of the Lennon / McCartney catalogue, and then take a bigger bite out the innovative process of using the traditional bluegrass genre to bridge to unique sound that is so very refreshingly different.

An example of this experimentation is the group effort in building the song “Good in the Kitchen” as an a cappella rendering of a subject that conveys many connotations - depending on one’s appetite. A real crowd pleaser, and a personal favorite of mine as I experienced the band for the first time, was the song “Caroline,” created by former group Singer / Songwriter Annalisa Tornfelt. This fresh punch of a bluesy examination of an abused women, who would rather be dancing:

Caroline’s comin’ into town;
She got a black eye big and round.
Caroline’s got her dancing shoes;
She ain’t got a thing to lose.

Bearfoot trying their hand at a cappella on “Good in the Kitchen.”: Above.     photos by Stan Deatherage


As you can tell by the performance pictures the young women occupy the center, while the young men buttress these sirens, of extreme prowess, with their strings. Both men sing, and while most 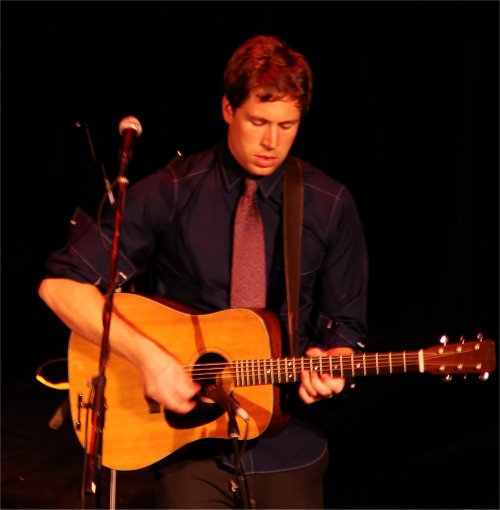 adequate, have yet to find their true voice, but I know it’s coming, just as it took Eric Clapton quite a few years to find his. One issue that is inarguable, is that of these two gentlemen possessing a uniquely gifted prowess of their respective string instruments. Mike Michelson on guitar and Jason Norris on mandolin are respectively as comfortable handling the rhythm duties as they are at challenging their skills playing the peppy leads that are required with all good bluegrass bands. Whether playing an occasional reel, traditional arrangement, or of their own construction, these gentlemen easily pull their weight.

In describing the talents and the entertainment values of Bearfoot, I spared no hyperbole for I spent none. These young performers are so good, and yet they appear to possess so much potential, 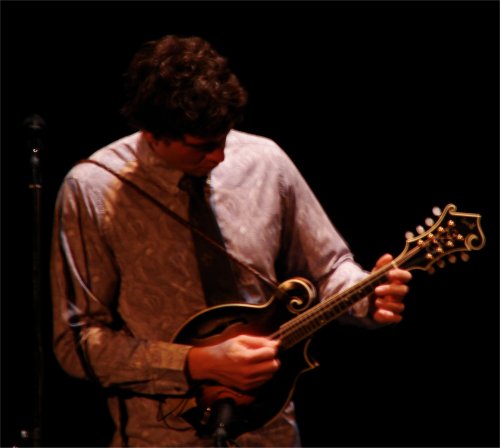 I tend to consider the next level for a band of this caliber is the one occupied by Alison Krause and Union Station. To get there the band members will need to continue the advancement of their respective talents, and find a topflight dobro picker like Jerry Douglas (with Union Station).

My immediate suggestion: Book a ticket to a local show, or buy Bearfoot’s latest CD or one of their earlier CD’s. We will review their individual volumes in later editions of Better Angels Now.

I leave you with a few pictures of Bearfoot: Here below.     photos by Stan Deatherage 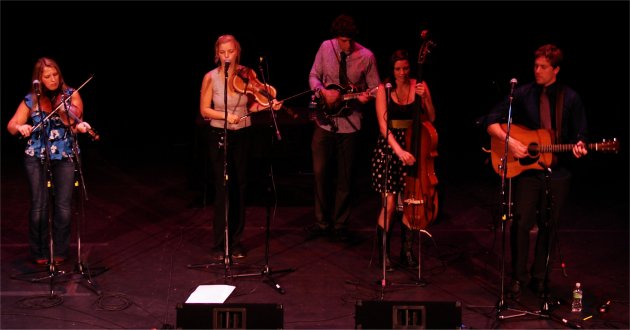 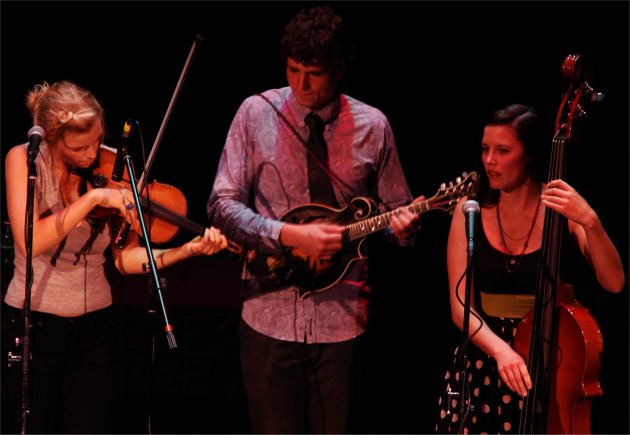 Odessa Jorgensen, Mike Norris and Kate Hamre finding that groove to slip into for some well synchronized harmonies. Odessa Jorgensen taking a breather from her lead and harmonizing vocal to join in with the band by bending a few notes on the fiddle.


This Article courtesy of our sister site: Better Angels Now.
Go Back